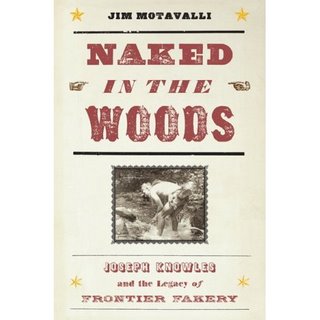 A man walks completely naked into the wilderness to survive for two months without any food, human contact, tools or ready made shelter. Sounds like the latest episode of Survivorman? Well, almost. While Survivorman’s Les Stroud is performing quite impressive feats, and is “One man – alone in the wilderness… no food, no shelter, no fresh water, no tools… no camera crew” He is in some ways merely writing another page in the book that Joseph Knowles, the infamous “Nature Man” of Maine, started writing back in 1913. Upon emerging from his ordeal after two months, Knowles became a sensation and triumphantly toured the nation, lecturing about and demonstrating his woodsman survival skills.

In Naked in the Woods, environmental author and journalist Jim Motavalli not only portrays faithfully the life and times of Knowles, and the enthusiasm and controversy around his wilderness exploits, but also opens a window to the era. The author travels with Knowles from the forests of Maine to the Oregon coasts, the newsrooms of Boston to an artists’ driftwood cottage in the Pacific Northwest. Motavalli contextualizes the events in the relationship of humans and nature, Knowles’ life, and the media’s exploitation of popular trends, then and now.

Knowles was quite a character, that’s for sure. Born in 1869, he grew up in Wilton in rural Maine, and by the time he walked naked into the forest in front of the clicks of the newspaper cameras, he had already manged to travel the seas with the navy, learn woodcraft with Native Americans, and establish himself as an artist living in a studio in Boston. Like Les Stroud, Knowles did not need a camera crew with him, but sent dispatches and drawings to the media written with his cookfire charcoal on birch bark. But did he really spend all this time in the wilderness? Or did he retire to a luxurious cabin for two months, courtesy of a newspaper looking to boost its circulation? The book investigates these claims in detail.

Motavalli also explores the reasons for Knowles’ story becoming such a media sensation at the time. Why then? He concludes that the main reason was the American anxiety over losing its frontier at the turn of the century, and transitioning from a rural to an urban society. Nature was slipping away from day-to-day life of the average American in a matter of a generation or two. Knowles the “Nature Man” was there to show the American public that the wilderness and the frontier were still there to face and conquer.

This is not only a strict academic study, and Motavalli does not present us with a dense cultural theory. He does, however, flesh out existing cultural history theories about frontier, nature, wilderness and American culture, by using this particular instance to show us how it all played out.

There’s no doubt “Nature Man” loved the forests and the beaches where he lived, but would he be called an environmentalist today? Probably not. When he went into the woods, he wanted to demonstrate that modern man could best nature, hardly part and parcel of today’s green ethos with its more harmonious undertones. But I am sure that he would have a thing or two to say about the bona fides of today’s armchair environmentalists with their cozy REI gear and Coleman gas stoves, and can inspire some of us to follow his lead and go naked into the woods one day. Well, if he really did it, that is.

Title: Naked in the Woods – Joseph Knowles and the Legacy of Frontier Fakery

sustainablog: The Good Book of Green Living: “The Self-Sufficientish Bible”