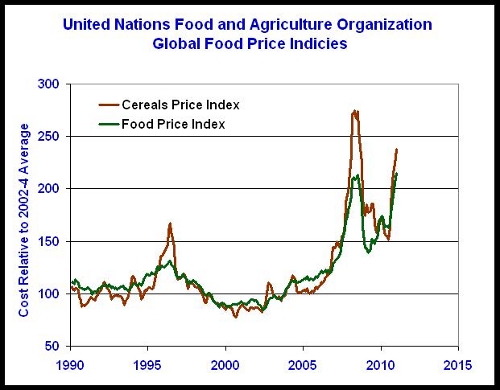 Last week, the United Nations Food and Agriculture Organization released a report which described the current upswing of global food prices (see chart above).  They characterized it as a “polite warning” of things to come in an era of climate change.

This rise is reminiscent of the 2007/8 food-price spike. That phenomenon raised American food prices by a modest 5%.  That same spike caused food riots in several countries that are highly dependent on imported food and for whom food is a large part or a family budget.  It looks like we are headed for a similar crisis again.

The Impact of Climate Change on Agriculture

Climate extremes played a significant role in both of these food price spikes, but there were other factors involved (rising population, rising income levels in China and India, increasing energy costs, biofuel demand).  This troublesome brew of factors is likely to combine with greater frequency and intensity according to all the models of climate change.  In the future, supply issues with phosphorus fertilizer could become another driver of food shortages.  In the absence of a coordinated international response to climate change, it is prudent to be doing the work to try to prepare our food system for these inevitable shocks.

A Bit of Hope for the Food Supply

That brings up the hopeful bit of news from last week.  Pioneer Hi-Breds (owned by DuPont) announced that it will commercially launch a new line of AquaMax corn hybrids for farmers in the Western Corn Belt of the US in 2012.  These seed options will give farmers around a 5% yield advantage under drought limiting circumstances.  This is a very significant advancement, but it was not the first of its type.  The seed companies Garst and NK (owned by Syngenta) have previously announced that they will start selling their own Agrisure Artesian  drought tolerant corn hybrids in that market in 2011.

This may not sound that significant, but drought tolerance has long been something of a “holy grail” for the seed industry.  Most of the world’s farms are “rain fed” meaning that they are completely dependent on precipitation to support the growth of the crop.  In some areas like Iowa (see Chart below), growing season rainfall is commonly in the 18-24 inch range that is optimal for a corn crop, but there still are years that are too dry or when the pattern of the rainfall is non-ideal.  Areas like Western Nebraska are frequently dry enough that yields are severely limited.  The new hybrids that are soon to be available will actually help growers in both areas and actually represent a significant and long-sought advancement.  Enhanced drought tolerance has always been a desirable trait, but climate change makes it even more important.

In both cases (DuPont and Syngenta), these new drought tolerant lines were developed using “marker assisted selection” (MAS).  This is just traditional breeding informed by the ability to track the movement of hundreds of genes in the crosses via biotechnology.  There are also efforts underway to enhance drought tolerance with transgenic methods, but it will be several years at best before those make it through the regulatory process.  The MAS approach is also being extended to other crops like wheat.

There are some people who seem to think there is something intrinsically wrong with a for-profit seed industry, but this is a good example of how competitive, commercial companies make multi-million-dollar, long-term investments that would otherwise never occur. In this case, an investment that will not only benefit the farmers and the seed companies, but also the poor of the world who really feel the impact of food price spikes. In addition, the technology advancements from these commercial seed markets are being leveraged on a not-for-profit bais to deliver similar benefits to small-holder farmers in the developing world.  It is estimated that climate change could drop production for poor maize farmers by 30%, so this is important.

Syngenta, through its philanthropic arm the Syngenta Foundation, is working with the independent, international breeding program, CIMMYT, to make their drought tolerance technology available for the corn hybrids that are grown by small farmers throughout Asia.  There is a similar project for sub-Saharan Africa called WEMA which is funded by the Gates Foundation among others.  It is leveraging conventional and MAB advances from Monsanto.  This is not about creating markets for the big seed companies, as many falsely claim.  The goal is to provide the advanced technology to the local seed companies and to the governmental breeding programs in the Third World – technology they could never afford to develop.

The bottom line is that we are facing at least periodic food supply challenges that are exacerbated by climate change.  It is a really good thing that companies have been investing in the development of crops that can ameliorate that threat, at least to some degree.  This in no way reduces the need for society to wrestle with the issue of climate change from a personal and public policy perspective.  It is just one small but important contribution.

Concerned about ingredients in your personal care products? Check out our current listings of organic and natural options from Aura Cacia, Kiss My Face, and Burt’s Bees.