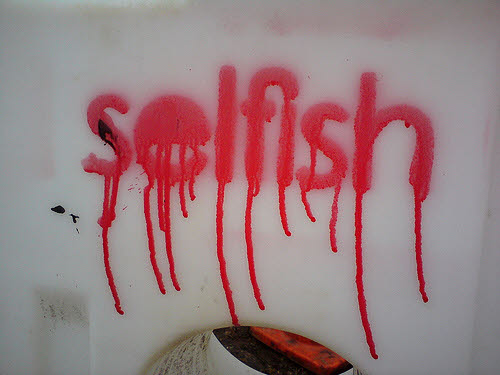 A recent report by psychologists shows an alarming increase in egocentricity among young adults. In psychological parlance it is called a narcissistic personality disorder. This potentially spells bad news for the environment.

Psychologists Jean Twenge and W. Keith Campbell are the authors of The Narcissism Epidemic: Living in the Age of Entitlement. In it they report that narcissistic personality traits have become so pervasive in American culture that they threaten to transform us into a nation of egomaniacs. The condition is particularly common among young adults where its prevalence matches that of obesity.

What has this to do with the well documented wave of environmental crises facing the planet? The answer is that the one thing that prevents us from fixing these crises is a particular symptom of narcissism – and that is the inability to care about anything outside your own immediate interests. In a word, narcissism equates to apathy.

Green education is the obvious antidote to this apathy and the National Environmental Education Act of 1990 was a significant step. However a moment of thought reveals an interesting conundrum. There is no suggestion that better education in green values will affect the causes of the narcissism epidemic. What this means is that an increase in environmental awareness will likely to occur alongside an escalation in egocentricity. How this will play out is anyone’s guess. Perhaps the outcome will be a functional, but somewhat uneasy alliance whereby self-interest champions conservation.

At best, this would appear to be a high risk strategy – selfishness and selflessness are not natural bedfellows. A sounder approach might be to try and tackle the causes of egocentricity at their source. According to Freud, egocentricity – and narcissism in particular – is “an attempt to null the pain of disappointed love and the child’s rage against the perceived inadequacies of caretakers.” This is in accord with the causes listed by Twenge, of which the foremost is ‘parenting.’

So perhaps the answer lies in raising our children so that they aren’t blinded by preoccupations to the planet’s plight. Of course many believe this to be unrealistic, and the pragmatic approach of education and legislation is the only way forward. In this attitude one is reminded of Marx’s famous adage that “the point is not to understand the world but to transform it”.

However the evidence suggests that on a global scale this strategy is not winning the day. Of course we are now faced with the developing economic powerhouses of China and India, where environmental concerns appear to be, at best, a luxury, as they race to catch up with the West. It is concerning to note that Twenge reports that the narcissism epidemic is not confined to the U.S. Indeed the term ‘little emperor syndrome’ has been coined to describe the self-interest of the new generation of Chinese.

In light of these developments it is not surprising that more and more thinkers are eschewing the solely pragmatic for more profound solutions. Richard Neville is one who summed up the situation when he said “We humans are locked in a race between self destruction and self discovery”. Another is Australian biologist Jeremy Griffith, who has no doubt that egocentricity is responsible for the apathy that leaves us in such peril, and that more egocentricity will only bring more destruction. Like Neville, he believes that the choice before us is stark: either we understand our condition better, or we perish.

What we can be sure of is that rising levels of egocentricity have added a new and potentially dangerous dimension to an already dire predicament, and that any thinking on the environmental problem must take this into account.

Jason is passionate about the world we live in and what we can do to change it. Recently the ideas presented by the World Transformation Movement have interested him greatly. See what you think here!