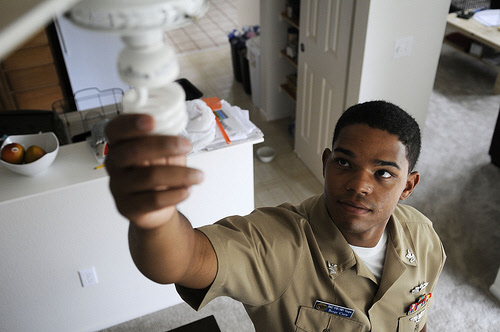 The first key component of the Earth Policy Institute’s climate stabilization plan is to systematically raise the efficiency of the world energy economy. One of the quickest ways to increase efficiency, cut carbon emissions, and save money is simply to change light bulbs.

Some 19 percent of world electricity demand goes to lighting. The carbon emissions generated by this sector equal roughly 70 percent of those produced by the global automobile fleet. Of the 3,400 terawatt-hours of electricity consumed annually by the world’s light fixtures, more than 40 percent is used by commercial buildings, including offices, retail businesses, schools, and hospitals. Close to one third is used in the home; 18 percent in industrial buildings; and the remaining 8 percent in outdoor applications, such as lights at traffic stops and in parking lots. Replacing inefficient incandescent bulbs with highly efficient compact fluorescent lamps (CFLs) can reduce the electricity used for lighting by three fourths or more. And since they last up to 10 times as long, each typical CFL will cut electricity bills by roughly $40 over its lifetime. The world has reached a tipping point in shifting to CFLs as many countries phase out incandescents. Since 2006 some 40 countries, including Australia, Cuba, Japan, the United States, and the entire European Union, have phased out incandescents or have pledged to do so.

LEDs: the Next Step to More Efficient Lighting

But even before the transition to CFLs is complete, the shift to light-emitting diodes (LEDs) is under way. Now the world’s most advanced lighting technology, LEDs use even less energy than CFLs and can last for 20 years or more.

LEDs are quickly taking over several niche markets, such as traffic lights. In the United States, almost 70 percent of traffic lights have been converted to LEDs, while the figure is still less than 20 percent in Europe. New York City has changed all its traffic lights to LEDs, cutting the annual bill for power and maintenance by $6 million. For the far more numerous street lights, the potential savings are even greater. As prices continue to drop, LEDs are expected to take more than 50 percent of the overall North American and European lighting markets by 2015 and 80 percent by 2020.

Energy can also be saved by using motion sensors that turn lights off in unoccupied spaces. Automatic dimmers can reduce the intensity of interior lighting when sunlight is bright. LEDs combined with these “smart” lighting technologies can cut electricity bills by 90 percent compared with incandescents.

All told, shifting to CFLs in homes, to the most advanced linear fluorescents in office buildings, commercial outlets, and factories, and to LEDs for traffic lights would cut the electricity now used for lighting by 65 percent, while dropping lighting’s share of total world electricity use from all sectors from 19 to 7 percent. This would save enough electricity to close 705 of the world’s 2,800 coal-fired plants. If the world turns heavily to LEDs for lighting by 2020, as now seems likely, the savings would be even greater. Combining this revolution in lighting efficiency with similar energy-saving efforts in other major economic sectors, it is possible to offset all projected growth in energy use between now and 2020.

For more information on energy efficiency and the other components of the Earth Policy Institute’s plan to stabilize climate, see World on the Edge by Lester R. Brown at www.earth-policy.org.

Image credit: Official US Navy Imagery at Flickr under a Creative Commons license