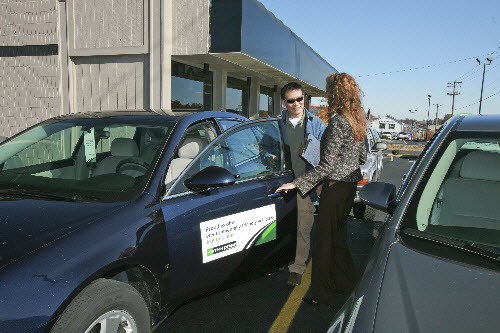 Last week, I began to take a look at some of the environmental initiatives underway at St. Louis-based Enterprise Rent-a-Car (which also own National and Alamo). While my discussion with VP of Corporate Responsibility and Communications Pat Farrell, and VP of Public Relations Christine Conrad, involved all five of the current “planks” in the company’s environmental platform, we were there to focus on its most recent announcement: customers could now purchase carbon offsets when reserving a vehicle by phone, or through the company’s web site.

The offset program with Terrapass started just over a month ago, with the company officially announcing it on January 15th. To its surprise, the program gained popularity before the official announcement: after the soft launch on January 1st, an average of 1000 customers a day were buying the $1.25 offset option. I did ask Pat about the controversy surrounding offsets: was this simply a way to make drivers feel better about doing the things they always do? Are they simply green “indulgences?” He told me,

That’s why the offset program is the fifth of the five planks in our platform. I often equate offsets with ‘marking time’ or ‘marching in place’: you’re doing something, but not necessarily moving forward. So, if that’s all you’re doing, that would make me uncomfortable. If you’re using them in combination with other solutions, though, that makes sense.

Pat also noted that customers were asking for this option: they wanted to make their driving, at the very least, “carbon neutral,” and Terrapass offsets gave them that option. Finally, Pat noted that Enterprise isn’t a “subject matter expert” on clean technology; rather, the company

…buys a lot of cars, and need the availability of cars to both make a living, and to provide a service that’s necessary to our customers while our transportation system is still largely based on the personal vehicle. Still, we didn’t want a platform that simply spoke to marking time, but one that recognizes we’ll need to find solutions over time. While we’re looking for that ideal combination of solutions, we need to offer our customers the opportunity to at least achieve some measure of balance.

These issues came up as Enterprise began discussing offsets: Pat said he’s been studying and thinking about the idea for over two years. In addition to controversy surrounding offsets, CEO Andy Taylor didn’t want to create the perception that the company was simply asking customers to pay for the pollution created by Enterprise vehicles. So, in addition to giving some customers that option (it’s only available for phone and web reservations, not for rentals paid for by a third party like corporate partners or insurance companies), it also committed to matching offset purchases up to $1 million.

Both Pat and Christine made clear that the offsets program, or even the company’s whole environmental platform, won’t solve climate change and related environmental problems: they are merely steps forward, as opposed to solutions in and of themselves. Current initiatives also include hourly rental options in certain markets, and future planks in the platform will involve engaging company employees in environmental stewardship activities (I immediately thought of Wal-Mart’s Personal Sustainability Projects). Enterprise is also committed to keeping a close eye on clean vehicle trends, and supporting them to the degree that it meets other company objectives. As someone who’s read a lot of press releases about companies “going green,” their candor on the topic was refreshing.

Ultimately, I think the change in thinking about how a company does business, and the impact its choices make, may be the most important parts of programs like these. I still don’t know if a rental car company can be truly “green.” But I’m also not sure if that’s as important as a company taking steps in the right direction, looking for other opportunities to do business in a more sustainable manner, and recognizing that customers really want greener options when making spending decisions. If a company as large as Enterprise realizes that adopting greener purchasing and operating practices can improve the more traditional bottom line, that’s a win. I’ll be waiting to see how transparently Enterprise shares the results of these experiments — that’s still a challenge for most large, established companies, and one I hope they overcome. They have entered the conversation, though… and that’s a good place to start.

Other articles on Enterprise’s environmental initiatives:

“Nothing but Green Skies”: Inc. magazine

“Enterprise’s 50 million tree plan. What are you doing for Arbor Day?”: AutoblogGreen