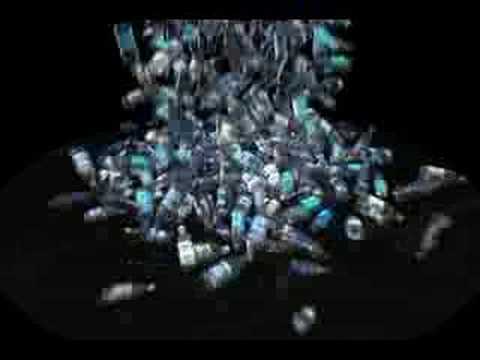 It’s ironic. In many parts of the world, there is no clean drinking water. Here in the U.S., pure, drinkable water flows out of every tap, and yet Americans buy a staggering amount of bottled water. We pay big bucks for it, too – over $15 billion a year.

Worst of all, the bottles are overflowing our landfills, and contribute to global warming.

Take a look at this video from Doug James, and then check out these surprising facts.

More than a quarter of bottled water is just processed tap water, including Pepsi’s Aquafina and Coca-Cola’s Dasani. Despite this, bottled water consumption is growing at 10 percent a year, faster than any other beverage. We drink 15 times more bottled water today than we did in 1976.

The Earth isn’t healthier for it, either. According to the Pacific Institute’s fact sheet [PDF], manufacturing the 30+ billion plastic water bottles we bought in 2006:

And these numbers don’t include transporting the bottles. Nearly 25 percent of bottled water crosses national borders before reaching consumers. Adding in transportation, the energy used comes to over 50 million barrels of oil equivalent – enough to run 3 million cars for a year.

Fiji Water produces more than a million bottles of water a day, while more than half the people in Fiji do not have reliable drinking water (see Fast Company article). Adding to the irony, Fiji itself uses almost no bottled water, according to a Pacific Institute report [PDF]. They export it.

Shipping Fiji Water around the world increases its environmental footprint. Manufacturing and shipping a one liter bottle produces over half a pound of greenhouse gas emissions, and uses nearly 7 times the amount of water in the bottle, according to calculations by Pablo Päster on TriplePundit.

The heavy use of water is as serious as the greenhouse gas emissions. Water is fast becoming a scarce resource.

We Could Recycle, But…

Recycling would help, but we don’t usually do it. Less than 20 percent of the 28 billion single-serving water bottles that Americans buy each year are recycled. Some estimates are as low as 12 percent.

According to a Container Recycling Institute report [PDF], the national recycling rate for all beverage containers is 33 percent. In states with deposit systems, the rate jumps to 65-95 percent. But of the eleven states with deposit laws, only three include containers for non-carbonated beverages (like water), though non-carbonated beverages now comprise 27 percent of the market.

The beverage industry, which long resisted deposit laws, has started to cooperate — mainly because it sees bottled water as the answer to the soda sales slump. Following months of bad publicity, manufacturers like Coke, Pepsi, and Nestlé have begun making lighter-weight plastic bottles, and are encouraging consumers to recycle.

If you buy bottled water, recycle the bottle. But the better solution — for you and the environment — is to drink tap water, both at home and at restaurants:

The quality of municipal water in the U.S. is generally excellent. Don’t let the recent reports about pharmaceuticals in tap water deter you — see this TreeHugger post for why.

But if you don’t trust tap water, or you have old plumbing, or you think tap water tastes funny, then try a water filter like those from PUR or Brita. To learn more about water filters, check out the rated list of water filter review sites at Consumer Search.

To carry water with you, use a reusable container filled with tap water. But don’t reuse single-use water bottles. This can expose you to bacterial build-up and carcinogens leached from the plastic.

Quite a few companies make reusable water bottles. There’s an ongoing debate about the safety of the polycarbonate plastic some use, but there are many safe reusable bottles made from other materials.

Use it or Lose it

National Geographic‘s Green Guide notes, “…the federal share of funding for water systems has declined from 78 percent in 1973 to 3 percent today.” This places the financial burden almost entirely on local governments.

Food and Water Watch also talks about how important it is to stop this trend and maintain the quality of municipal water. Their Take Back the Tap [PDF] report gives a detailed overview of the issues surrounding tap water versus bottled water.

What do you think? Can you give up bottled water?