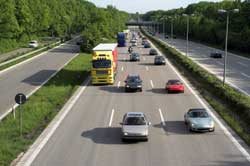 Peak driving season, when many Americans hit the road to visit relatives or see the sights, is now in full swing. With U.S. gas prices topping $4 a gallon in some places — and likely to edge up more during summer’s high demand — you may want to consider taking more efficient mass transportation.

But if you travel by car, you can still cut your fuel usage, save money and reduce your carbon footprint by driving smart.

1. Look into going by train or bus instead of by car or plane.

Taking a train or a bus, instead of driving or flying, results in less global warming pollution per person for the miles traveled (and may cost less, too).

On average, taking a trip by bus produces the least amount of greenhouse gas per passenger mile, followed by train travel, then air. Cars, light trucks and motorcycles contribute the most to global warming pollution.

These comparisons assume the vehicles are not filled to capacity on average. Trains come out even better in comparison to planes when both are full. (Note that Amtrak offers discounts on some routes for people over age 62.)

2. If you decide on a road trip, get your car in good shape.

Getting better gas mileage is no longer just about cutting greenhouse gas emissions. It’s also about saving some serious money.

By following these rules of thumb, you will save gas and money — and your car will last longer.

The rental car business is slowly turning over a green leaf. Many of the major national rental companies (such as Avis, Budget, Enterprise and Hertz) are offering a small number of fuel-sipping hybrids like the Toyota Prius in selected cities.

If a hybrid is not available, a subcompact, compact or economy car usually goes easier on the gas and is less costly to rent than a larger vehicle.

Get more details at Yahoo’s Green Center and find the top cars by green rating to help you select a rental car that meets your family’s needs.

Part of the fun of a road trip is the adventure of exploring unknown territory. But getting lost and going miles out of your way is no fun — and wastes precious gas. So map out your route and keep maps handy to recheck.

A car navigation system is one high-tech way to keep on track in unfamiliar areas and get to your destination without wasting time and fuel.

5. Pile your friends and family in the same car.

Is one big, packed car better than two small, half-empty cars? The answer depends on the average gas mileage of the vehicles being compared.

But in general, if the larger car has a fuel economy at least half that of the two small cars, then it is more efficient to take the one large car. Here’s the math.

Take this hypothetical example: an SUV that gets 15 mpg on average versus two cars that get 30 mpg. For two people on a 30-mile trip, you’d burn roughly two gallons of gas in the SUV , and you’d also burn two gallons in the two cars (one gallon per car times two cars).

The average car in the U.S. carries 1.6 passengers, so if you carry more than that, you’re helping to reduce the nation’s carbon footprint. Plus, you can pool expenses and save on gasoline.

6. When you’re finally on the road, drive gently.

You can increase your gas mileage by as much as 50 percent for highway driving (and by five percent for stop-and-go city driving) simply by accelerating and decelerating smoothly and slowly. Aggressive driving, such as mashing down the accelerator or the brake, uses an extra 125 gallons a year on average — so by driving gently you can save $473 a year in today’s prices.

You’d be surprised at how much fuel is squandered by driving over 60 miles per hour. Generally, each 5 mph over 60 mph you go is like paying an extra 20 cents per gallon of gas.

To keep your speed down while taking in more local color, consider taking less-traveled back roads, rather than the Interstates. It’s easier to keep the speedometer below 60 mph when other cars aren’t whizzing by you at 85 miles an hour!

When you are unloading or packing your car, turn off the engine. An idling car gets zero miles to the gallon and contributes to global warming pollution. Contrary to popular belief, restarting your car does not burn more fuel than leaving it idling.