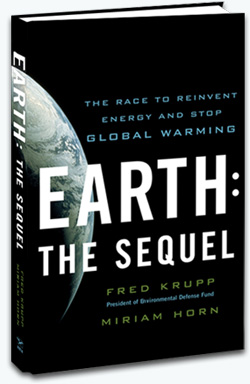 This post is by Fred Krupp, President of the Environmental Defense Fund.

Earth: The Sequel tells the story of an exciting race that is just beginning — the race to develop low-carbon energy in time to turn our greatest environmental crisis into our greatest economic opportunity.

Many people have expressed surprise that I’d write a book like this about a problem so serious. And global warming is serious. With each passing year, scientists get more and more alarmed at the increase and extent of disturbing impacts. But this book is not about the doom and gloom of global warming. In fact, it’s just the opposite.

Earth: The Sequel is about hope, invention, ingenuity, entrepreneurialism, capital markets, commerce, and profit. These are words that most people don’t think of when they hear the term “global warming,” and they especially don’t expect to hear them coming from me. After all, I’m an environmental lawyer running one of the country’s most respected and influential environmental groups, advocating for good environmental policy.

I wrote this book because, after 20 years of studying global warming and trying to craft solutions to stop it, I know that government policy alone is not the answer. Enacting a hard cap on carbon will play a key supporting role, but the starring role belongs to American commerce.

The stars are the ingenious inventors and risk-taking entrepreneurs who are creating flying windmills, artificial carbon-eating trees, and breakthroughs in solar and biomass technologies. The book explores how we will reinvent everything from cars to concrete, and replace the old, dumb, centralized electrical grid with a smart, multidirectional energy network.

The vibrancy of our future lives largely depends on our winning this race — a race both to stop global warming, and to win the upside of new opportunities if we do. We can win and win big, or we could lose and lose big. It’s both the scariest and most exciting race of my lifetime.

I wrote Earth: The Sequel to describe the race and change the conversation about global warming. I want others to know about the real people doing the real work that will change our lives, and I want to inspire people to embrace a new and different future, rather than be afraid of it.

Earth: The Sequel is available in stores now, so I hope you’ll take a look. Please let me know what you think.

More about Earth: The Sequel.