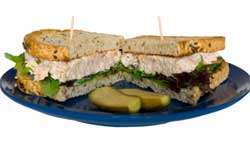 The report might have also made many parents uneasy about the ubiquitous tuna sandwich in their kids’ lunch boxes. Many of us rely on canned tuna for a wholesome, high-protein meal. Once considered a “nuisance food” or “pauper’s food,” today almost half of all American households serve canned tuna monthly. Only shrimp surpasses canned tuna as Americans’ favorite seafood. But does this beloved fish in a can deliver a helping of toxic mercury, too?

Given the popularity of canned tuna fish and its moderate levels of mercury, parents should monitor how much their kids eat.

Here’s why: Children (and infants and fetuses) are particularly vulnerable to the health effects of mercury, since their brains and nervous systems are still developing. They may suffer learning disabilities and developmental delays from prolonged or repeated exposure to even small amounts of mercury.

Children who were exposed to mercury before birth may experience problems with mental development and coordination, including how they think, learn and problem-solve later in life.

Parents can still feed kids tuna, if they are mindful of which types they feed their children and how often. There are two main kinds of canned tuna: Canned light (chunk light) and canned albacore tuna (solid/chunk white)

Adults, too, should limit how much albacore they eat, especially if they are pregnant or of child-bearing age (more details on seafood and contaminants).

The safer choice is canned light, but kids should still not eat it every day. Parents should limit their young children’s meals of canned light tuna to 3 meals per month. Older kids and adults can safely eat it once a week or more.

Why the difference in mercury for the two types of canned tuna? The reason, simply put, is that albacore (white) is a larger, more predatory species of tuna, so it accumulates more mercury in its tissues. Skipjack, which accounts for most canned light tuna, doesn’t grow nearly as large as albacore, so it has approximately one-third the mercury levels.

But read the canned light label carefully: Some canned light tuna reportedly contains yellowfin tuna, which has similar mercury levels to albacore. These products are sometimes (but not always) labeled “gourmet” or “tonno,” and their consumption should be limited by both adults and children.

Armed with information, parents can still safely include tuna salad sandwiches in their lunch boxes, in moderation. An even better choice is canned salmon. Canned salmon is mainly sockeye or pink from Alaska — a wise choice not only because the fish are low in contaminants and high in heart-healthy omega-3s, but also because they are sustainably caught.

Please share this post with the parents and kids you know — they’ll appreciate knowing how to keep their exposure down.