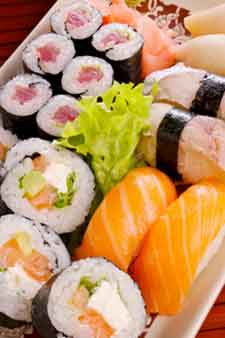 As a marine scientist who has been researching seafood sustainability and health issues for a long time, I’ve known for a while that bluefin tuna not only has high mercury levels but is severely depleted, too.

These magnificent fish are highly prized for their rich, buttery flesh. The global sushi market can’t get enough bluefin, and as a result, exorbitant prices and severe overfishing are driving bluefin tuna to the brink of extinction.

I love sushi as much as the next person, but given its dire population numbers and high mercury levels, maybe its time that we all lay off for a while.

Now making big headlines is a New York Times report that found that much of the bluefin sushi served in upscale New York City restaurants actually exceeds the Food and Drug Administration’s “action level” for mercury. (The threshold is 1 part per million.)

To reiterate: It’s no surprise that bluefin tuna has high levels of mercury – it’s one of the largest and most predatory fish species in the ocean. What is surprising is just how many New York City restaurants are serving the really high-mercury tuna.

And it’s not just Big Apple sushi that may pose a danger to your health. Mercury levels in bluefin are likely to be very high regardless of location, as I explained to Times reporter Marian Burros in the article.

The big picture? There’s good news and bad news. First, the FDA is failing the American people when it comes to seafood safety. The FDA inspects less than one percent of imported seafood annually, a fact made clear by recent news stories about illegal drug residues in seafood imported from China. Far less seafood is ever tested for environmental toxins such as mercury.

The concentrations of mercury found in New York City tuna sushi were above the “action level” – meaning FDA can actually take the fish off the market. But the FDA does so little mercury testing it can’t even come close to enforcing its own safety standards. For U.S. consumers, the situation is ‘buyer beware’.

The good news is that it’s easier to make eco-friendly and healthy seafood choices than you think. Environmental Defense’s Seafood Selector maintains a list of contaminated fish based on data from over 200 studies by academic and government scientists. We also recommend seafood choices that are healthy for you and the environment.

The bottom line is that you don’t have to sacrifice the health benefits of fish because a few species are high in mercury. Adventurous sushi-lovers might try Atlantic mackerel or farmed oysters instead – they’re not only low in contaminants and high in heart-healthy omega-3s, there are plenty of them (unlike bluefin).

Get ecological and health information on more than 200 kinds of fish at Environmental Defense’s Seafood Selector.