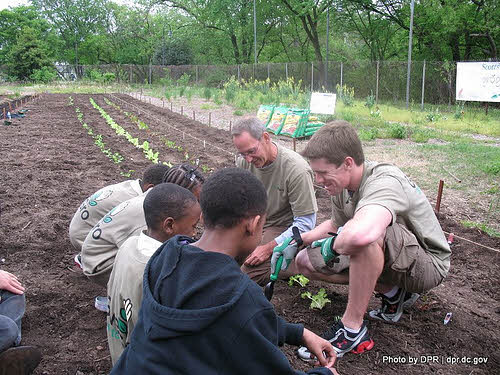 What’s going on in Washington these days? Duh, debt ceiling negotiations, right? Fortunately, that’s not all… there is still legislation in the works that addresses other issues beyond government spending. One bill that’s back: the No Child Left Inside Act, which would provide a funding mechanism for state environmental education initiatives.

Of course, this isn’t the first time that members of Congress (from both parties) have tried to get this law passed… its history goes back to 2007. The argument surrounding it has generally focused on a perceived ideological agenda by supporters: essentially, we treehugging types want to brainwash the young into thinking as we do.

I could try to fire back directly against this argument, but I doubt I’d change any minds of people already wedded to it. Rather, I’d like to point out some of the educational benefits I see coming from studying the natural world and efforts to protect it. Could it create kids more concerned about our use of natural resources? Sure… but I think environmental education offers some real benefits to students that have nothing to do with treehugging… and much to do with how kids learn best.

A Few of the Potential Educational Benefits of Environmental Education

It encourages hands-on learning: If you’ve spent any time at all watching kids (your own or others), you know they don’t need a classroom, a desk, or even a teacher to learn… they interact with the world around them, listen and watch, and make sense out of things all on their own. Kids are learning machines… and they’re “wired” to learn through imitating, playing, exploring, touching… in short, doing something. This doesn’t just apply to elementary school students: when I taught, I participated in a number of discussions on how college freshmen still learned best this way… even after twelve years of “sit in your seat and pay attention.”

A good environmental education curriculum will focus on students taking action: planting a garden, taking a hike to identify plants and animals, or gathering water samples for pollution analysis. This kind of education engages kids in the way they’re born to learn.

It engages them in science: When’s the last time you heard a politician wringing his/her hands about how woefully behind our kids are in science? I’d argue that at least part of that comes from how we teach it: sure, we do some hands-on experimentation (lab time), but it’s mostly lecture and reading. That often makes it difficult for kids to recognize how this stuff fits into their worlds. I know that I enjoyed high school physics, for instance, much more than chemistry because I could easily see it at work outside the classroom.

Environmental education doesn’t just get kids active… it gets them active gathering samples and data, differentiating between species, and recognizing patterns and systems… all hallmarks of scientific thinking. None of these thought processes are limited to the environment: they could prepare students well for study of and careers in medicine, engineering, and other technological and scientific pursuits.

It requires cross-disciplinary thinking: How clearly is your life divided up by disciplines? It probably isn’t… but, for the most part, we teach subject matter that way. But environmental studies requires cross-disciplinary approaches to teaching. Sure, science is important here, but so are political science, economics, sociology, and anthropology. The natural world inspires artists of all stripes, so it can serve as a doorway to visual art, music, and literature. And arguing for environmental conservation (or even against it) requires rhetorical and writing skills.

It requires systems thinking: In a very basic sense, nature’s a system… or, more accurately, a system of systems. Studying the environment requires exploring those systems, and the connections and feedback inherent in them. You simply can’t look at elements of nature, or our impact on it, in a vacuum, and understand it completely.

Part of the rationale behind the No Child Left Inside act is the de-funding of things like environmental education… which, traditionally, we’ve seen as outside the scope of “normal” education. I’d argue that environmental studies (along with other approaches that aim for these kinds of goals) should be the norm. Not because I’m a treehugger (I am)… but because I want to see kids leave school with the intellectual tools they need to thrive.

No doubt I’ve missed some learning benefits that come from environmental ed., or given other short shrift, so chime in… do you think environmental studies are critical to kids’ learning?