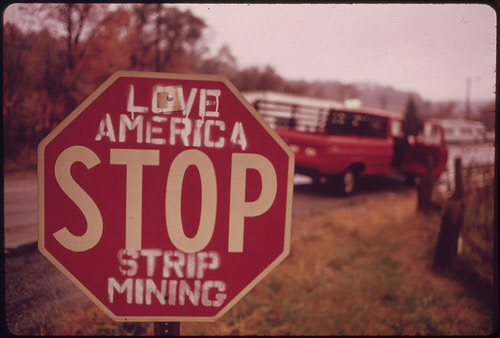 Until a few days ago, I’d never heard of the DOCUMERICA project, an effort by the EPA in the 1970s to “capture images relating to environmental problems, EPA activities, and everyday life.” Beginning in 1972, the agency hired numerous freelance photographers to get out and about in the country to take the photos, and ended up with a collection of thousands of images by the project’s end in 1977. Many of the images are now available online — the National Archives has digitized over 15,000 of them — and they provide a great window into the state of our natural and built environments nearly 40 years ago.

Of course, most of the subjects of these photographs have changed… whether through development, environmental degradation, or reclamation. So the EPA has decided the photography collection itself needs updating… and is asking citizen photographers to join in. The State of the Environment Photo Project, which began earlier this year, will run through Earth Day 2012, and challenges photographers of all skill levels to re-shoot the photos from the seventies in order to give all of us a sense of how these scenes have changed in the past 30-40 years.

The project has created a blog, and is posting sets of photos from around the country each Monday. To participate, simply go to the location of the those photos and re-shoot the scene. EPA will choose the best “after” photos to include in a traveling exhibit scheduled for next year.

Interested in participating? Read the rules, and check out the photos already submitted. You can also put in a request for the contest to feature certain photos of your area… they’re all available on Flickr, and organized by state/location at the National Archives site. And please let us know if you do participate, and give us a link to the pictures you took.

Most of us have vivid images in our mind from famous photographs… just think of the sailor kissing a woman in Time Square at the end of World War II. Pictures aren’t just worth a thousand words… they capture the spirit of times and places with vividness and emotion. I know some will say “this is your tax dollars at work,” but capturing our environmental history is this manner strikes me as important and necessary… and the method by which the EPA is doing this isn’t just inexpensive, but also incredibly democratic.”

Got a favorite from the original DOCUMERICA collection? Saw something in the new submissions that caught your eye? Point us to it…