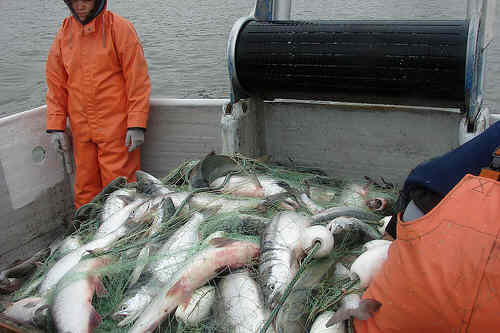 After World War II, accelerating population growth and steadily rising incomes drove the demand for seafood upward at a record pace. At the same time, advances in fishing technologies, including huge refrigerated processing ships that enabled trawlers to exploit distant oceans, enabled fishers to respond to the growing world demand. In response, the oceanic fish catch climbed from 19 million tons in 1950 to its historic high of 93 million tons in 1997. This fivefold growth—more than double that of population—raised the wild seafood supply per person worldwide from 7 kilograms (15.4 pounds) in 1950 to a peak of 17 kilograms in 1988. Since then, it has fallen to 14 kilograms.

As population grows and as modern food marketing systems give more people access to these products, seafood consumption is growing. Indeed, the human appetite for seafood is outgrowing the sustainable yield of oceanic fisheries. Today 75 percent of fisheries are being fished at or beyond their sustainable capacity. As a result, many are in decline and some have collapsed.

While oceanic fisheries face numerous threats, it is overfishing that directly threatens their survival. Oceanic harvests expanded as new technologies evolved, ranging from sonar for tracking schools of fish to vast driftnets that are collectively long enough to circle the earth many times over. Indeed, a 2003 landmark study published in Nature concluded that 90 percent of the large fish in the oceans had disappeared over the last 50 years, as a result of this expansion.

Fisheries are collapsing throughout the world. The 500-year-old cod fishery of Canada failed in the early 1990s, putting some 40,000 fishers and fish processors out of work. Fisheries off the coast of New England soon followed. And in Europe, cod fisheries are in decline, approaching a free fall. Like the Canadian cod fishery, the European ones may have been depleted to the point of no return. Countries that fail to meet nature’s deadlines for halting overfishing face fishery decline and collapse.

Atlantic stocks of the heavily fished bluefin tuna—a large specimen of which, headed for Tokyo’s sushi restaurants, can bring in $100,000—have been cut by a staggering 94 percent. It will take years for such long-lived species to recover, even if fishing were to stop altogether.

The U.S. Chesapeake Bay, which yielded more than 35 million pounds of oysters per year a half-century ago, now produces scarcely 1 million pounds per year. A deadly combination of overharvesting, pollutants, oyster disease, and siltation from soil erosion is responsible.

Even among countries accustomed to working together, such as those in the European Union (EU), the challenge of negotiating catch limits at sustainable levels can be difficult. In April 1997, after prolonged negotiations, agreement was reached in Brussels to reduce the fishing capacity of EU fleets by up to 30 percent for endangered species and overfished stocks. The EU had finally reached agreement on reducing the catch but these and subsequent cuts have not been sufficient to arrest the decline of the region’s fisheries.

When some fisheries collapse, it puts more pressure on those that remain. Local shortages quickly become global shortages. With restrictions on the catch in overfished EU waters, the heavily subsidized EU fishing fleet has turned to the west coast of Africa, buying licenses to fish off the coasts of Cape Verde, Guinea-Bissau, Mauritania, Morocco, and Senegal. They are competing there with fleets from China, Japan, Russia, South Korea, and Taiwan. For impoverished countries like Mauritania and Guinea-Bissau, income from fishing licenses can account for up to half of government revenue. Unfortunately for the Africans, their fisheries too are collapsing.

Overfishing is not the only threat to the world’s seafood supply. Some 90 percent of fish residing in the ocean rely on coastal wetlands, mangrove swamps, or rivers as spawning areas. Well over half of the mangrove forests in tropical and subtropical countries have been lost. The disappearance of coastal wetlands in industrial countries is even greater. In Italy, whose coastal wetlands are the nurseries for many Mediterranean fisheries, the loss is a whopping 95 percent.

Damage to coral reefs from higher ocean temperatures and ocean acidification caused by higher atmospheric carbon dioxide levels, as well as damage from pollution and sedimentation, are threatening these breeding grounds for fish in tropical and subtropical waters. Between 2000 and 2004, the worldwide share of destroyed reefs, those that had lost 90 percent of live corals, expanded from 11 percent to 20 percent. Some 24 percent of the remaining reefs are at risk of imminent collapse, with another 26 percent facing significant loss in the next few decades, due to mounting human pressures. As the reefs deteriorate, so do the fisheries that depend on them.

Pollution is taking a devastating toll, illustrated by the dead zones created by nutrient runoff from fertilizer and from sewage discharge. In the United States, the Mississippi River carries nutrients from the Corn Belt and sewage from cities along its route into the Gulf of Mexico. The nutrient surge creates huge algal blooms that then die and decompose, consuming the free oxygen in the water, leading to the death of fish. This creates a dead zone each summer in the Gulf that can reach the size of New Jersey. Worldwide, there are now more than 200 dead zones in oceans and seas, “deserts” where there are no fishing trawlers because there are no fish.

For decades governments have tried to save specific fisheries by restricting the catch of individual species. Sometimes this worked; sometimes it failed and fisheries collapsed. In recent years, support for another approach—the creation of marine reserves or marine parks—has been gaining momentum. These reserves, where fishing is restricted, serve as natural hatcheries, helping to repopulate the surrounding area.

In 2002, at the World Summit on Sustainable Development in Johannesburg, coastal nations pledged to create national networks of marine parks, which together could constitute a global network of such parks. At the World Parks Congress in Durban in 2003, delegates recommended protecting 20–30 percent of each marine habitat from fishing. This would be up from 0.6 percent of the oceans that are currently included in marine reserves of widely varying size.

A U.K. team of scientists led by Dr. Andrew Balmford of Cambridge University’s Conservation Science Group analyzed the costs of operating marine reserves on a large scale, and concluded that managing reserves that covered 30 percent of the world’s oceans would cost $12–14 billion a year. At stake in the creation of a global network of marine reserves is the protection and possible increase of an annual oceanic fish catch worth $70–80 billion, as well as the creation of 1 million new jobs.

A 2001 statement signed by 161 leading marine scientists called for urgent action to create the global network of marine reserves. The signatories noted how quickly sea life improves once the reserves are established. Within a year or two of establishing a marine reserve, population densities increased 91 percent, average fish size went up 31 percent, and species diversity rose 20 percent.

While the creation of marine reserves is clearly the overriding priority in the long-standing effort to protect marine ecosystems, other measures are also required. One is to reduce the nutrient flows from fertilizer runoff and untreated sewage that create the world’s 200 or so dead zones.

In the end, governments need to eliminate fishery subsidies. There are now so many fishing trawlers that their catch potential is nearly double any yield the oceans can sustain. Restoring fisheries by spending $12–14 billion on managing a network of marine reserves is far less than the $22 billion in harmful subsidies that governments dole out today to fishers to empty our oceans.

Adapted from Chapter 5, “Natural Systems Under Stress,” and Chapter 8, “Restoring the Earth,” in Lester R. Brown, Plan B 3.0: Mobilizing to Save Civilization (New York: W.W. Norton & Company, 2008), available for free downloading and purchase at www.earthpolicy.org/Books/PB3/index.htm.

Image credit: echoforsberg at Flickr under a Creative Commons license