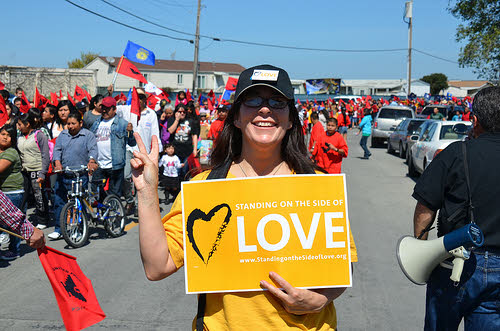 Part 13 of the Harvesting Justice series

For decades, farm workers – the more than one million men and women who work in fields and orchards around the country – have been leading a struggle for justice in our food system. They have been building awareness and mobilizing the public, successfully securing some rights, higher wages, and better working conditions. Today, a recent string of victories by the farmworker group Coalition of Immokalee Workers (CIW), together with the steadfast work of other groups, have taken the movement to a whole new level.

The United Farm Workers (UFW), founded in 1966 by Dolores Huerta, César Chávez, and others, launched the modern-day farmworker movement. They brought their struggles to national attention by leading boycotts against grape and lettuce growers. Consumers around the country banished grapes and lettuce from their grocery lists, forcing growers to raise wages and to improve labor conditions. Since then, farmworkers have used work stoppages, hunger strikes, marches, union negotiations, and boycotts to win substantial improvements. No longer is it commonplace for crew leaders – those who round up workers and manage the crew – to beat workers, for example, or for farms to aerially spray pesticides in fields while people are working in them.

Exploitation in the Field

Despite these significant advances, farm workers are still afforded inadequate rights, both on the books and in practice. They perform strenuous physical labor without the protections of sick leave, overtime pay, or health insurance. They are exempt from the National Labor Relations Act that protects workers’ rights to form unions and bargain collectively. If farm workers try to organize or if they anger their bosses, they can be fired with absolutely no legal recourse. More than half are estimated to be undocumented, and live under the constant threat of deportation if they try to stand up for better conditions.[i] They may also be unable to demand their rights because they don’t speak English, or are unaware of what rights they do have.[ii] Racism and xenophobia play out in many ways, compounding the exploitation.

The minimum wage didn’t even apply to farm workers until 1966, long after most professions were covered. And today, despite the law, many don’t in actuality make minimum wage. Farm workers are twice as likely as other workers to live below the poverty line, and most earn an average of $10,000 to $12,000 per year.

These low wages are the result of cost-saving endeavors of corporate players along the food supply chain. The monumental profits of the fast-food industry, for example, come in part from companies’ ability to buy their ingredients cheaply. In an industry with estimated sales of $167.7 billion, company buyers use their power to pay the lowest prices possible to growers and food processors. Growers and processors, in turn, pay the lowest wages they can for field and factory work. Those suppressed wages go hand in hand with suppressing rights, so that workers don’t have the power to organize for better pay.

Farm workers are also subject to inhumane working and living conditions. In the worst instances, they have been victims of slavery. Workers have been kept under armed guard, locked up at night, forced to work, denied the right to speak to people off the farm, and beaten if they attempt to escape. Since 1997 in Florida alone, the federal government has won seven criminal prosecutions for farm worker slavery, involving more than 1,000 workers. Since 2010, Florida has initiated two more prosecutions.

Most farm workers come from villages in Mexico, Central America, and the Caribbean. They are living the boomerang of globalization, often forced to emigrate in search of work because agriculture in their home countries has been weakened by US and global trade policies. One farm advocacy group noted, “US agriculture policy has thus created a de facto immigration policy.”[iii]

The United Farm Workers continues its work with a membership of approximately 27,000. In 2011, the union won 10 labor contracts, covering 1,150 workers. Also in 2011, after many months of organizing, including a 200-mile, 13-day march through the Central Valley of California, the union pushed through state legislation which protects workers from employer intimidation during union votes. Currently, the United Farm Workers are ramping up organizing as a part of nationwide efforts to pass legislation providing a path to citizenship for undocumented farm workers.

The Coalition of Immokalee Workers (CIW), a group started in 1993 by tomato pickers in Immokalee, Florida, has been making profound advances. In 2005, after a four-year boycott against Taco Bell, CIW won its first major victory when Taco Bell’s parent corporation, Yum! Brands, agreed to pay a penny more per pound for their tomatoes. Since then, their steadfast work has resulted in 10 similar contracts with other corporations, almost doubling the wages and guaranteeing fair working conditions for thousands of tomato pickers. Last year, both Chipotle Mexican Grill and Trader Joe’s signed onto the Fair Food Program. Now Publix and Wendy’s are their targets. The CIW is the embodiment of the quote, “If you think you are too small to make a difference, try sleeping with a mosquito.” (See the next article in this series, on May 13, for more about the CIW.)

The Farm Labor Organizing Committee (FLOC) is another significant player. Started in 1967, FLOC has been winning greater power and better working conditions for thousands of cucumber pickers through successful boycotts and strikes aimed at Campbell’s, Heinz, and Mount Olive Pickle Company. FLOC also works in Mexico, holding workshops for those headed to the US for temporary agricultural work. They prepare those soon-to-be workers with information about their rights and about union campaigns taking place in the US, in the hopes of minimizing their vulnerability to exploitation before it even starts.

Each of these successful campaigns has relied on farm workers and consumers working together. Farmworkers arm the public with knowledge and strategy, and the public adds pressure on companies and government to force change. What’s at stake is not only an improvement in wages and working conditions, but a shift of power.

Melody Gonzalez, a former organizer with the Student/Farmworker Alliance that supports the CIW, explained, “You can pass laws, you can have enforcement codes. But unless the workers are in a position of leadership where they decide what the problems are and what they think the solutions are, you’re not going to be able to impact systemic, long-lasting change. It comes down to the power of those most affected to say what their human rights are, what they want, what they need, what they deserve.”

[i] U.S. Department of Labor, “A Demographic and Employment Profile of United States Farm Workers,” Research Report No. 9, March 2005, 3, http://www.doleta.gov/agworker/report9/naws_rpt9.pdf. According to a National Agricultural Workers Survey from 2000-2001, 53% of the farmworkers in the U.S. are undocumented. However, because these statistics rely on self-reporting, some people think the number is actually much higher. Rob Williams, the director of the Migrant Farmworker Justice Project, estimates that over 90% are undocumented. See: The Economist, “Field of Tears: They Came to America Illegally, for the Best of Reasons,” online, December 16, 2010, http://www.economist.com/node/17722932.

[ii] Ibid. 81% of farmworkers speak Spanish as a native language, according to the National Agricultural Workers Survey.