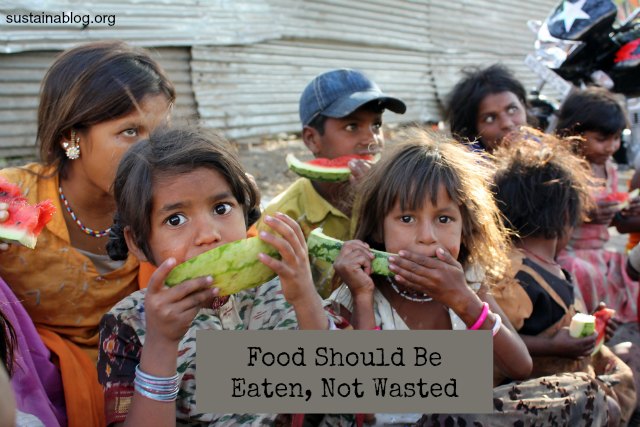 Massive amounts of food waste appear primarily in the developed world, right? That’s where people can afford to throw edible food away. The precarious economies of developing countries keep this from happening… right?

Well, not exactly. While the world’s poorer nations have larger percentages of their population facing food insecurity, they also have pockets of relative wealth, and the services that cater to such populations. So, cities like Hyderabad, India, or Karachi, Pakistan, you’ll find yuppies eating in trendy restaurants as well as starving people out on the street. In many places, a lack of development doesn’t mean a lack of wealth, but a greater concentration of it… and a greater gap between the rich and the poor.

As the developing world also produces food waste, it also produces citizens and residents that recognize that waste and try to address it. The Robin Hood Army (RHA) was founded last Summer by Neel Ghose and Anand Sinha in the Indian capital of Delhi. Based on the mission of their mascot – to “take from the rich, and give to the poor” – the organization gathers up unsold food from restaurants, repackages it for distribution, and then shares it with people who are hungry.

Sounds a lot like Food, Not Bombs and similar organizations, right? Yes… and like these organizations, the very young RHA uses a decentralized model to spread its “army.” Social media allows for sharing knowledge and best practices with new groups that want to pick up RHA’s work in their own communities. According to The Guardian, “Anand and I don’t have to be in cities physically to set up our presence,” says Ghose. “We simply guide people on how to form communities for the RHA.” The model is working: in less than a year, the Robin Hood Army has established a presence in Karachi, Delhi, Kolkata, Mumbai, Hyderabad, Bangalore, Jaipur and Jabalpur (with Lahore and Trivandrum “in the pipeline”).

In addition to restaurant wastes, Ghose and Sinha recognized that Indian wedding season (November – January) represented a huge opportunity for them: “According to the Centre for Development Communication (CDC), an NGO in Jaipur, there are an estimated 7m weddings in India during the season. Yet nearly one-fifth of all prepared food is thrown away – a staggering £1.6bn in wastage.” The organization works with caterers to ensure that leftover food gets picked up, regardless of how late a party runs.

Keep in mind that this organization is a mere 10 months old – this is all pretty impressive! I know many criticize international food aid as ineffective, as distribution often breaks down. Those efforts might learn a thing or two from these 20-somethings.

Know of similar organizations in the developing world? Tell us about them…