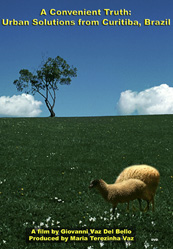 When discussing the world most progressive “eco” cities one might toss out San Francisco for it various green initiatives (such as banning plastic bags), New York City for its effective subway system, or Munich with it’s use of alternative energy especially solar but after watching this recent documentary “A Convenient Truth: Urban Solutions from Curitiba, Brazil” some people may change their green tune. The film highlights the surprisingly progressive sustainable city and using urban examples to highlight various topics into well paced film.

First time director Giovanni Vaz Del Bello neatly divides the film down into four areas of innovation: Transportation, Recycling, Affordable Housing and Urban Parks. Convenient Truth shows how convenient the transportation remains in this million plus city. Their progressive mayors like Jamie Lerner, city planners and designers determined that the city should revolve around people, not cars. From the cost-effective yet expansive bus system (with the notable bus station tubes) to the pedestrian-only walkways, then documentary highlights how effective, people friendly and sustainable changes can be made with minimal or no cost.

Cinematographer Maria Terezinha (who also produced) captures energizing city images that encompass the film’s other topics. When cities like New York City often can’t afford to keep their recycling program going, A Convenient Truth shows how Curitiba offers programs that not only clean most of the cityscape but have created a subset of employment based around recycling all while keeping within the city budget. The film addresses social justice with a section about low-cost urban housing and finally how city parks have not only beatified the city but have increased property values (and thus property taxes) as well as prevented floods that used to ravage the city.

The film makes interesting parallels toward New Orleans (and hurricane Katrina) as well as some Bay Area eyesores that could get a clue from the solutions found in Curitiba. Although the film suffers slightly from low production value and the sound quality wavers the docu-feature offers an interesting topic of a city that most people know little if anything about.