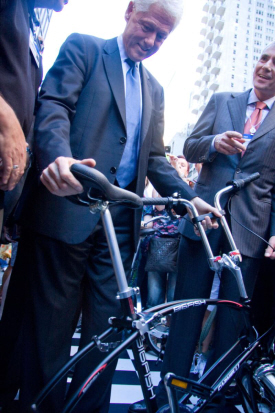 Ever thought “I’d love to take public transportation to work… if the bus/train stop wasn’t so far away?” It’s an issue for many mass transit systems: buses and trains can provide transportation for the lion’s share of most of our regular trips… but the first and last miles (or whatever short distance applies) keeps many from taking advantage of these otherwise cheap and efficient sources of mobility. In fact, it’s such a big issue that it’s under discussion at this week’s annual meeting of the Clinton Global Intiative (CGI)… along with just about every other topic under the sun related to human rights & justice, health, and sustainability.

Folding bikes maker Bigfish Bikes is at the CGI meeting, and used the forum as a platform for promoting its own, and similar, products as an answer to the first/last mile issue. It makes sense: using traditional bikes with mass transit isn’t ideal (I know I wouldn’t want to throw mine on one of the bike holders on the front of the bus), but folding bikes allow rider to carry their bikes with them onto the bus or train… without taking up tons of space and uttering “Excuse me” a lot.

But Bigfish isn’t at CGI for a promotional opportunity. Rather, the company announced its own Commitment to Action, which involved putting its money where its mouth is in terms of this very issue. Specifically, Big Fish and parent company Studio Moderna “commits to bring two innovative fold-and-go bike pilot projects to the greater Los Angeles area”:

The combination of biking and mass transit strikes me as ideal: not everyone wants to bike the entire distance to work, and many cities still aren’t particularly bike-friendly. But getting to the bus stop may create challenges, also… and “park and ride” is generally only an option in the burbs. I’ll be interested to see how both of these pilots play out.

Use a folding bike? Or combine biking and public transportation to get where you need to go? Tell us about it… and let us know what you think about these pilot programs.