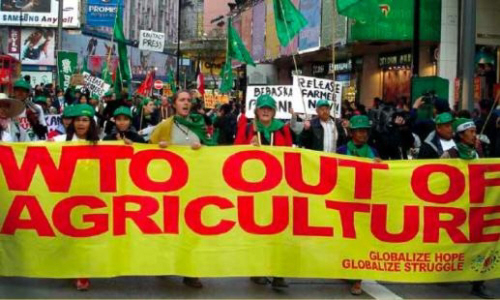 A Via Campesina march in Hong Kong, 2005, demanding an end to WTO trade negotiations over agriculture.

Part 3 of the Harvesting Justice Series

Agricultural economist Peter Rosset is with the Center for the Study of Rural Change in Mexico and the Land Research Action Network. He is also a member of the technical support team of Via Campesina. Beverly Bell talked with Peter Rosset in Havana in 2009; they updated the interview in 2012.

There are several fundamental pillars that are necessary to take control over food and agricultural systems. One is to force even reluctant or reactionary governments to regain control over their national borders from the flow of imported food. That means canceling free trade agreements and not signing WTO agreements. It means stopping the import either of incredibly cheap, subsidized food from agro-export countries which drives local producers out of business, or of food made ridiculously expensive by food speculation.

Governments also need to support peasant and small-farmer agriculture as the fundamental source of food for national economies. Why not big farms or agribusiness? It’s more than proven in any country in the world that if agribusiness controls the majority of the land, there will not be enough food for people because agribusiness just doesn’t produce food for local people. What agribusiness does, be it the United States or Thailand, is produce exports.

Sometimes those exports are not even food for people but soybeans for animals, or ethanol, or biodiesel for automobiles in other part of the world.

On the other hand, the real vocation of the small farm, the family farm, the peasant farm, the indigenous farm, is producing food for the family, for the local economy, and for the national economy. All over the world, these farmers are underrepresented in control of land. So a second essential element to claim control over food and agricultural systems is for countries to place their bets on peasant and family agriculture. And that means land has to be taken away from agribusiness. That, in turn, means real agrarian reform, redistribution of land to people who are landless, who are poor, who want to earn a living with dignity by producing food for people. And that means rebuilding small and family agriculture by investing in it. That necessitates changing budget priorities so that, instead of government subsidies flowing to support the exports of agribusiness, they flow to small farms.

Yet a third pillar in reclaiming control of agriculture means changing how we produce food. Via Campesina and other social movements say that we can no longer afford to keep food prices tied to the cost of petroleum. We can’t keep using indiscriminate amounts of chemical fertilizer, tractors, mechanical harvesters, and pesticides. We need to engage in ecological agriculture that preserves soil fertility for future generations.

Fourthly, we need to defend the territories of indigenous peoples and peasant communities who haven’t yet lost their land. Part of the strategy must also be to gain new territories through land reform or land occupations.

A fifth element involves seeds. We can’t allow seeds to be patented and privatized by Monsanto and Syngenta and other corporations. We can’t allow them to be contaminated by GMOs. We need to support the free exchange of local, indigenous seeds, because those varieties are much more adapted to local environmental conditions and can form a much stronger basis for new national food systems.

Sixth, we need to nationalize the food reserves that are in the hands of transnational corporations. Part of the origin of the recent food crisis is that under neoliberal policies of the past 20 years, most countries sold off their food inventories that were in the hands of the public sector.

World food reserves are now largely in the hands of private corporations like Cargill and Archer Daniels Midland. This is a problem because when it comes to food reserves, the public sector and the private sector behave in exactly opposite ways. If there’s a food shortage, the public sector releases food from storage so that prices won’t rise so fast, or so people who can’t afford food can get it from public sources. But private traders and transnational corporations hoard and speculate. That is, they withhold food from the market in order to drive prices up even higher so that they can make a windfall profit, at the cost of some people not being able to eat.

But we can’t just renationalize food reserves in the hands of governments because we can’t trust governments. There has to be some kind of a co-management scheme where farmers and consumers, through their social movements and grassroots organizations, participate in owning and managing food reserves so that those reserves exist in every country – but at the service of people, not of private profit.

Via Campesina and allied social movements have all gathered together under the banner of food sovereignty. This is the collective banner of struggle to build counter-power to transnational corporations, to renationalize food systems, and to regain control over rural territories and the land. To make sure that land is used to support rural peoples. To support production, for local and national consumption, of healthier food, more affordable food, food that’s not speculated with, that’s not hoarded, that’s not contaminated with GMOs. To reclaim our food systems and protect our lands and territories.

Image courtesy of Via Campesina.