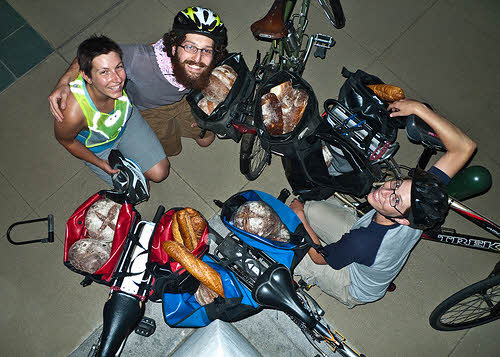 We’ve said it before, we’ll say it again: an awful lot of food – about 40% from farm to table – gets wasted in the US. Much of that happens closer to the table/consumer end of the spectrum, and a sizable portion of that food that gets thrown away is perfectly edible. The growth of dumpster diving isn’t just a radical hipster thing; it reflects a broader realization that we’re tossing away not only good food, but also the resources that went into growing, harvesting, and distributing it.

Still don’t want to go after food in dumpsters, even if it is fresh and edible? We understand… and there are other ways to make sure that food gets to people who can eat it. I’m not sure I knew the term “food rescue” until last week or so, and would’ve automatically associated it with dumpster diving, but it’s actually a label for non-profits that identify retail outlets that are throwing away a lot of good food, and helping them to find organizations that can make sure that food feeds people… not the landfill. An organization like Feeding America does this at a national level, but there are also small food rescues focused on the local community: we’ve got one here in St. Louis.

Clearly, though, there’s still a lot of need for such services: 40% is a lot of food to go to waste. If you’d like to rescue some of it yourself, and there’s not a nearby organization in which you could volunteer (and you don’t want to dumpster dive), you could start your own. Colorado’s Boulder Food Rescue has written a guidebook for wannabe food rescuers called The Package Deal, and it’s freely available on their website.

You won’t learn the fine points of dumpster diving here (which is good, because you don’t want to do that); you will learn how to identify potential contributors (which can involve some dumpster snooping), approach them, and “make the sale,” so to speak. You’ll also learn how to find good recipients for all of this largess, and how to establish your organization legally. Finally, you’ll learn what you need to do this all on bike… the guide even provides links to good sources of plans for building bike trailers.

Some of the forms and such included are hand-drawn, but, hey, you’re just going to use those internally, so who cares? Otherwise, this is a thorough and professional guide to the main steps of setting up a non-profit dedicated to keep edible food out of the dump.

Have you started your own food rescue organization? What do you think of BFR’s guide? Share your thoughts with us…