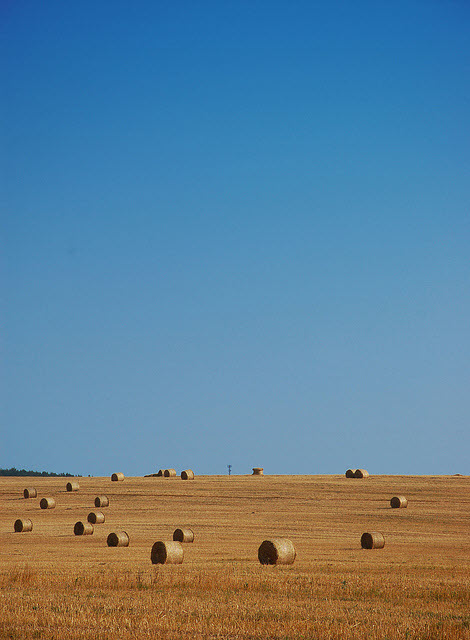 Heat waves clearly can destroy crop harvests. The world saw high heat decimate Russian wheat in 2010. Crop ecologists have found that each 1-degree-Celsius rise in temperature above the optimum can reduce grain harvests by 10 percent. But the indirect effects of higher temperatures on our food supply are no less serious.

Rising temperatures are already melting the West Antarctic and Greenland ice sheets. Recent studies indicate that a combination of melting ice sheets and glaciers, plus the thermal expansion of the ocean as it warms, could raise sea level by up to 6 feet during this century. Yet even a 3-foot rise in sea level would sharply reduce the rice harvest in Asia, a region home to over half the world’s people that grows 90 percent of the world’s rice. It would inundate half the riceland in Bangladesh and submerge part of the Mekong Delta in Viet Nam. Viet Nam, second only to Thailand as a rice exporter, could lose its exportable rice surplus. This would leave the 20 or so countries that import rice from Viet Nam looking elsewhere. Numerous other rice-growing river deltas in Asia would be submerged in varying degrees.

While the ice sheets are melting, so too are mountain glaciers. The snow and ice masses in the world’s mountain ranges and the water they store are taken for granted simply because they have been there since before agriculture began. Now we risk losing the “reservoirs in the sky” on which so many farmers and cities depend.

The World Glacier Monitoring Service reported in 2010 the nineteenth consecutive year of shrinking mountain glaciers. Glaciers are melting in all of the world’s major mountain ranges, including the Andes, the Rockies, the Alps, the Himalayas, and the Tibetan Plateau.

In South America, some 22 percent of Peru’s glacial endowment, which feeds the many rivers that supply water to farmers and cities in the arid coastal regions, has disappeared. Ohio State University glaciologist Lonnie Thompson reported in 2007 that the Quelccaya Glacier in southern Peru, which had been retreating by 20 feet per year in the 1960s, was retreating by 200 feet annually. Bolivia is also fast losing the glaciers whose ice melt supplies its farmers and cities with water. Between 1975 and 2006, the area of its glaciers shrank by nearly half. Bolivia’s famed Chacaltaya Glacier, once the site of the world’s highest ski resort, disappeared in 2009.

For the 53 million people living in Peru, Bolivia, and Ecuador, the loss of their mountain glaciers and dry-season river flow threatens food security and political stability. Not only do farmers in the region produce much of their wheat and potatoes with the river water from these disappearing glaciers, but well over half the region’s electricity supply comes from hydroelectric sources. Currently, few countries are being affected by melting mountain glaciers as much as these Andean societies.

As Peru’s glaciers shrink, the water flow from the mountains to the country’s arid coastal region, where 60 percent of the people live, will decline during the dry season. This region includes Lima, which, with nearly 9 million inhabitants, is the world’s second largest desert city, after Cairo. Given the coming decline in its water supply, a U.N. study refers to Lima as “a crisis waiting to happen.”

In many of the world’s agricultural regions, snow is the leading source of irrigation and drinking water. In the southwestern United States, for instance, the Colorado River — the region’s primary source of irrigation water — depends on snowfields in the Rockies for much of its flow. California, in addition to depending heavily on the Colorado, relies on snowmelt from the Sierra Nevada mountain range to supply irrigation water to the Central Valley, the country’s fruit and vegetable basket.

A preliminary analysis of rising temperature effects on three major river systems in the western United States — the Columbia, the Sacramento, and the Colorado — indicates that the winter snow pack in the mountains feeding them will be reduced dramatically and that winter rainfall and flooding will increase. With a business-as-usual energy policy, global climate models project a 70-percent reduction in the snow pack for the western United States by mid-century. A detailed study of the Yakima River Valley, a vast fruit-growing region in Washington State, shows progressively heavier harvest losses as the snow pack shrinks, reducing irrigation water flows.

Agriculture in the Central Asian countries of Afghanistan, Kazakhstan, Kyrgyzstan, Tajikistan, Turkmenistan, and Uzbekistan depends heavily on snowmelt from the Hindu Kush, Pamir, and Tien Shan Mountain ranges for irrigation water. And nearby Iran gets much of its water from the snowmelt in the 5,700-meter-high Alborz Mountains between Tehran and the Caspian Sea.

Ice melting in the Himalayas and on the Tibetan Plateau poses an even graver threat to food security at a global scale. It is the ice melt from these mountain glaciers that helps sustain the major rivers of Asia during the dry season, when irrigation needs are greatest. In the Indus, Ganges, Yellow, and Yangtze River basins, where irrigated agriculture depends heavily on the rivers, the loss of any dry-season flow is bad news for farmers. China is the world’s leading producer of wheat. India is number two. (The United States is number three.) With rice, China and India totally dominate the world harvest. Therefore, the melting of these glaciers coupled with the depletion of aquifers present the most massive threat to food security the world has ever faced.

In India, the giant Gangotri Glacier, which helps keep the Ganges River flowing during the dry season, is retreating. The Ganges River is by far the largest source of surface water irrigation in India and a source of water for the 407 million people living in the Gangetic basin.

Yao Tandong, a leading Chinese glaciologist, reports that glaciers on the Tibetan Plateau in western China are now melting at an accelerating rate. Many smaller glaciers have already disappeared. Yao believes that two thirds of these glaciers could be gone by 2060. If this melting of glaciers continues, Yao says it “will eventually lead to an ecological catastrophe.” The Yangtze, by far the country’s largest river, helps to produce half or more of its 130-million-ton rice harvest.

Like the depletion of aquifers, the melting of glaciers can artificially inflate food production for a short period. At some point, however, as the glaciers shrink and the smaller ones disappear entirely, so does the water available for irrigation.

The melting of the glaciers on the Tibetan Plateau would appear to be China’s problem. It is. But it is also everyone else’s problem. In a world where grain prices have recently climbed to record highs, any disruption of the wheat or rice harvests due to water shortages in India or China will raise their grain imports, driving up food prices for all.

In India, where just over 40 percent of all children under five years of age are underweight and undernourished, hunger will intensify and child mortality will likely climb. For China, a country already struggling to contain food price inflation, there may well be spreading social unrest if food supplies tighten. For U.S. consumers, this melting poses a nightmare scenario. If China enters the world market for massive quantities of grain, as it has already done for soybeans over the last decade, it will necessarily come to the United States — far and away the leading grain exporter.

Ironically, the two countries that are planning to build most of the new coal-fired power plants, China and India, are precisely the ones whose food security is most massively threatened by the carbon emitted from burning coal. It is now in their interest to try and save their mountain glaciers by quickly shifting energy investment from coal-fired power plants into energy efficiency, wind farms, and solar thermal and geothermal power plants.

Adapted from World on the Edge by Lester R. Brown. Full book available at www.earth-policy.org/books/wote.