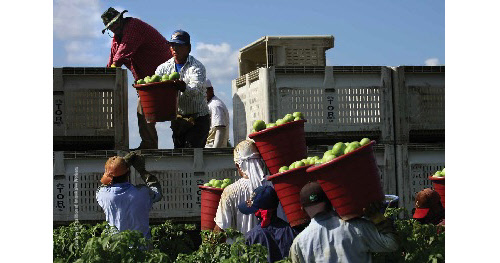 Part 8 of the Harvesting Justice series

Just outside of the small town of Maumelle, Arkansas sits your run-of-the-mill American strip mall. And as in so many other box store hubs, a Walmart dominates the landscape.

But something is a shade different about this one; its big, looming letters are not the standard blue. These letters, in a new, green hue, spell out “Walmart Neighborhood Market.” These “neighborhood markets” are a tactic in Walmart’s conquest of the grocery industry. The nation’s world’s biggest retail store now captures more than a fourth of the domestic grocery market.

We are bombarded and manipulated by corporate name brands every day. A Coca-Cola annual report some years back stated, “All of us in the Coca-Cola family wake up each morning knowing that every single one of the world’s 5.6 billion people will get thirsty that day… If we make it impossible for these 5.6 billion people to escape Coca-Cola…, then we assure our future success for many years to come. Doing anything else is not an option.”[i]

“Impossible” to “escape” sounds daunting, downright creepy. Yet people are escaping, in droves, a food system that is more obsessed with money than with sustenance.

The U.S.’s move towards industrialization in the 19th century ushered in major changes in agriculture. The focus shifted to creating an abundance of affordable food for a growing population while simultaneously reducing the number of people laboring in the fields, in order to free them up for work in the factories. The need for more food with less labor meant more mechanization and therefore bigger farms. The emergence of vast farms required that food travel long distances, and went hand-in-hand with the creation of companies to transport, package, and process the food.

Over the years, food has become increasingly commodified, that is, converted from nourishment to a mass-marketed consumer product. These days, an ever-shrinking number of mega-corporations controls an ever-expanding amount of food production, from seeds to equipment, from chemical inputs to processing. Consider these statistics:

The global movement for food justice and food sovereignty seeks to bust the corporate takeover of our food system, which has been accomplished with the complicity of our governments. Below are a few recent campaigns and victories in the U.S., where farmers, food justice activists, and consumers are uniting to challenge corporate rule.

In one strategy to reduce corporate control of the milk industry, fourteen states have been pushed to allow raw milk sales at locations off the farm, and nine states are considering bills of a similar nature. Milk that is produced and sold locally in small batches doesn’t require the lengthy shelf life or, therefore, the pasteurization process that has become status quo for industrialized milk. Most often sold directly off the farm, raw milk creates a more direct link between farmers and consumers, cuts out corporate middlepeople, and provides farmers with a larger percentage of the consumer dollar. And any raw-milk lover will swear it tastes better.

Vernon Hershberger, a Wisconsin dairy farmer who was charged with operating without a license and four criminal misdemeanors for supplying raw milk to a buyers’ club, said, “[T]his is about the fundamental right of farmers and consumers to engage in peaceful, private, mutually consenting agreements for food, without additional oversight.”

At least nine states have established some legal restraints to keep corporations from buying and owning farms. In Pennsylvania, the Community Environmental Legal Defense Fund has helped individual towns pass and defend local ordinances banning corporate farming in their communities.

The 2010 Supreme Court decision Citizens United v. Federal Election Commission prohibits government restrictions on political spending by corporations. Big agribusiness, as well as all other corporate industries, now have even greater sway over the political process. Communities around the country, led by organizations like Public Citizen, Public Campaign, Move to Amend, and United for the People, have introduced local resolutions calling on Congress to pass a constitutional amendment overturning Citizens United. As of March 2013, eleven states and more than 120 local municipalities or cities had passed these resolutions.

Organizations like the Program on Corporations, Law, and Democracy (POCLAD) have popularized the need to eliminate “corporate personhood,” not just in agriculture but in society in general. Corporate personhood gives corporations the same constitutional rights as human beings under the 14th Amendment, which means they are entitled to due process, equal protection, and free speech. POCLAD has been doing research, hosting workshops, and publishing books and articles to spark conversations about the effects of corporate power on our governance, lives and the planet.

Mass mobilization for Proposition 37, which would have required food manufacturers to place labels on any food containing GMOs in California, pushed the issue of GMOs into general public concern. Though the measure was defeated (with millions of corporate dollars working against it), the spike in awareness led by groups like Just Label It, Organic Consumers Association, Yes on 37 as well as communities across the country, paves the path for continued advocacy. GMO labeling laws are now in the works in Washington state and Vermont. And the grocery giant Whole Foods has agreed to label all GMO products by 2018.

Significant food chain worker victories have been effective in checking corporate power and pushing for fair wages and workers rights. Just in 2012, after targeted campaigns, the Coalition of Immokalee Workers pressured Trader Joe’s to sign a Fair Food Agreement, committing to higher wages for farmworkers, basic rights, and a monitoring system to ensure follow-through. Chipotle signed the agreement a few months afterward, becoming the 11th corporation to succumb to the CIW’s pressure. Meanwhile, Brandworkers International won a significant settlement from Flaum Appetizing for unpaid wages, after a joint campaign through Focus on the Food Chain. And the Food Chain Workers Alliance and Restaurant Opportunities Centers United continue to mobilize for Congress to raise standard and tipped minimum wage by pushing the Fair Minimum Wage Act.

Here are a few ways you can get involved in reclaiming food and agriculture from the corporations:

And check out these organizations and resources: