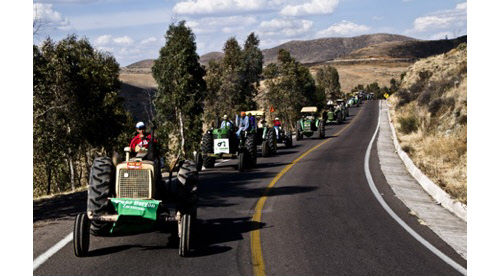 Over a half-century ago, Mahatma Gandhi led a multitude of Indians to the sea to make salt in defiance of the British Empire’s monopoly on this resource critical to people’s diet. The action catalyzed the fragmented movement for Indian independence and was the beginning of the end for Britain’s rule over India. The act of ‘making salt’ has since been repeated many times in many forms by people’s movements seeking liberation, justice and sovereignty: César Chávez, Nelson Mandela, and the Zapatistas are just a few of the most prominent examples. Our food movement – one that spans the globe – seeks food sovereignty from the monopolies that dominate our food systems, with the complicity of our governments. We are powerful, creative, committed and diverse. It is our time to make salt.

So began a statement from the People’s Movement Assembly on Food Sovereignty from the U.S. Social Forum in Detroit in 2010, which launched a national movement. So, too, begins a weekly blog series adapted from Other Worlds’ hot-off-the-press, 140-page book: Harvesting Justice: Transforming Food, Land, and Agriculture Systems in the Americas. The book is the result of five years of interviews and on-site research from throughout the hemisphere, describing strategies to win food justice and food sovereignty. It draws from more than 100 cutting-edge successes, grassroots alternatives, and inspiring models. An appendix offers hundreds of ways to get involved.

From community gardens to just global policy, a national and global movement is growing to reclaim food, land, and agricultural systems from agribusiness and put them back in the hands of citizens. A common thread links innovations and successes happening simultaneously around the globe: a vision of a society that values life and the earth over profit. In the U.S., the parts of the movement have often worked in isolation from each other, but in fact they are all pieces of an inseparable whole. Together, they address:

The group that released the “make salt” manifesto has since formalized itself into the U.S. Food Sovereignty Alliance. A mix of farmers, farm workers, organizers, Native community leaders, Washington policy analysts, and immigrants’ rights advocates, the group brings to the U.S., for the first time, a political demand that has long been seminal in the global South and parts of Europe: food sovereignty. Food sovereignty is a prerequisite for health and justice for all people, food, agriculture, and Mother Earth. It is an expansive set of principles, policies, and practices which ensure the right of everyone to ecologically sound, sustainably produced and harvested food. They also ensure the right of people and nations to democratic control over their food and agriculture systems.

The Nyéléni Declaration, named after a seminal food sovereignty forum in Mali in 1007, articulates the six key attributes of food sovereignty. Excerpted from the original, they are:

We women from more than 40 countries, from different indigenous peoples of Africa, the Americas, Europe, Asia and Oceania and from different sectors and social movements, have gathered together in Sélingué [Mali] to participate in the creation of a new right: the right to food sovereignty. We reaffirm our will to act to change the capitalist and patriarchal world which puts the interests of the market before the rights of people. Under the watchful eye of Nyéléni, an African woman who defied discriminatory rules, who shone from her creativity and agricultural prowess, we will find the energy to establish our right to food sovereignty, carrier of hope in constructing another world. We will carry this message to women all over the world.

The upcoming blog series shares some of the countless heartening changes that are happening in the movement. You can download Harvesting Justice: Transforming Food, Land, and Agriculture Systems in the Americas from which the blogs were taken, for free at www.harvesting-justice.org. At the end, you’ll find an appendix of organizations that are engaged in exciting work, books that we appreciate, and resources to feed your interest and the needs of your community. Meanwhile, please check back each week to be inspired and gain ideas for turning your commitment into action.

Tory Field is an organizer, farmer, and Research & Education Coordinator at Other Worlds.

Beverly Bell has worked for more than three decades as an advocate, organizer, and writer in collaboration with social movements in Latin America, the Caribbean, Africa, and the U.S. Her focus areas are just economies, democratic participation, and gender justice. Beverly currently serves as associate fellow at the Institute for Policy Studies and coordinator of Other Worlds, and is a member of the advisory board of Truthout. She is author of Walking on Fire: Haitian Women Stories of Survival and Resistance and of the forthcoming Fault Lines: Views Across Haiti’s Divide.

Copyleft Tory Field and Beverly Bell. You may reprint this article in whole or in part. Please credit any text or original research you use to Beverly Bell, Other Worlds.