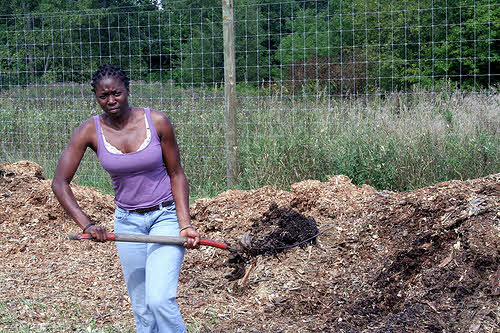 Editor’s note: Missed earlier posts in this series? You can find all of them here.

A shovel overturned can flip so much more than soil, worms, and weeds. Structural racism – the ways in which social systems and institutions promote and perpetuate the oppression of people of color – manifests at all points in the food system. It emerges as barriers to land ownership and credit access for farmers of color, as wage discrimination and poor working conditions for food and farmworkers of color, and as lack of healthy food in neighborhoods of color. It shows up as discrimination in housing, employment, redlining, and other elements which impact food access and food justice.

Many people involved in creating food – from Haitian tomato pickers organizing in Florida, to Native Americans saving seeds in Arizona, to Black Detroit residents growing gardens in fractured neighborhoods – are simultaneously chipping away at structural racism. In the Harvesting Justice series we touch on many of these issues, starting with a look at African-American farmers and what they doing to win justice in the food system.

In 1920, one in every seven farmers in the U.S. was African-American. Together, they owned nearly 15 million acres. Racism, violence, and massive migration from the rural South to the industrialized North have caused a steady decline in the number of Black farmers. So, too, has, institutional racism in the agricultural policies of the USDA. By 2007, African-American farmers numbered about one in 70, together owning only 4.2 million acres.

Over the years, studies by the U.S. Civil Rights Commission (CRC), as well as by the USDA itself, have shown that the USDA actively discriminated against Black farmers, earning it the nickname ‘the last plantation.’ A 1964 CRC study showed that the agency unjustly denied African-American farmers loans, disaster aid, and representation on agricultural committees. But organizations like the National Black Farmers Association, the Black Farmers and Agriculturalists Association, the Land Loss Prevention Project, and the Federation of Southern Cooperatives have been challenging racism in agricultural policy through legal action. In 1997-98, African-American farmers filed class-action lawsuits against the USDA for unjustly denying them loans. The lawsuits were consolidated into one case, Pigford v. Glickman, which was settled in 1999. But due to delays in filing claims, nearly 60,000 farmers and their heirs were left out of this settlement. In November 2010, the U.S. Congress passed the Claims Settlement Act (known as Pigford II) to compensate Black farmers who were left out of the first settlement. President Obama signed the bill a month later, making $1.25 billion available for claimants in the form of cash payments and loan forgiveness, though the Black Farmers and Agriculturalists Association has filed an appeal because Pigford II provides smaller payments and places limits on claimants’ future legal options.

Bell Hooks wrote, “Collective black self-recovery takes place when we begin to renew our relationship to the earth, when we remember the way of our ancestors… Living in modern society, without a sense of history, it has been easy for folks to forget that black people were first and foremost a people of the land, farmers.”[1]

Some who are still farmers are carrying on the fight for economic and civil rights for land-based African-American people, a fight which dates back to the days of slavery. Probably the most impressive contemporary example of such organizing has been the Federation of Southern Cooperatives. An outgrowth of the civil rights movement, it formed in 1967 when 22 cooperatives met at Atlanta University. The federation has used collective action ever since to support Black and other small farmers and rural communities. Today, their members include over 100 coops in 16 states across the South.

Next: Urban farming in African-American communities