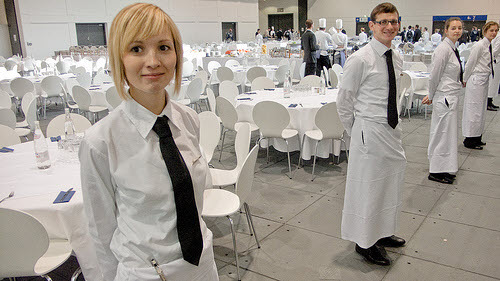 Part 18 of the Harvesting Justice series

“This is a muddler,” said Danielle, grinding mint into the bottom of a metal cup. With the straightforward demeanor of a good bartender, Danielle was explaining how to make a mojito. But this was not just a fancy drink demo. After the cocktail, she talked with the audience about her working life at an upscale steakhouse chain restaurant, including the steady sexual harassment and the uneasy feeling of being viewed by management as a number more than a person.

The two dozen folks listening to Danielle were part of a trial run “eat-up,” an event that some food movement organizers hope will soon crop up in homes, restaurants, and bars around the country. The events are part of a new push by the Restaurant Opportunities Centers United (ROC), the Food Chain Workers Alliance, and others. (See our previous article for more about these organizations.) The goal is to bring awareness and action for workers’ rights, wages, and conditions into the heart of the food movement.

“We are trying to have workers become as trendy as local and organic has become in the industry,” Saru Jayaraman, co-director and co-founder of ROC, told us. “It’s going to take the three stakeholders – workers, good employers, and consumers – working together to actually change things. Any one of those things, if it’s missing, it’s not going to work. Which is why the consumer piece is so critical, and it’s been missing. We’ve actually organized the workers and we’ve organized the employers. We’ve never organized the consumers. There’s a diners’ club that’s basically a credit card, but there’s no organized voice of restaurant consumers demanding change.”

ROC’s efforts to change conditions in the restaurant industry include campaigns to get basic benefits such as paid sick days, and to increase the minimum wage for tipped workers. The group and their allies are gathering signatures and raising support for the Miller-Harkin Fair Minimum Wage Act. If passed, the law would increase the federal minimum wage from $7.25 to $10.10 and the tipped minimum wage from $2.13 to 70% of the regular minimum wage.

ROC also aims to fundamentally shift the power structures that allow the inequities to exist in the first place. “In the long run, it’s really about having a powerful voice of restaurant workers that can counterbalance the power of the National Restaurant Association,” said Jayaraman. “Because these two issues, low wages and lack of paid sick days, are symptoms of the bigger problem of an imbalance of power between this huge powerful industry lobby and restaurant workers. The long-term vision is an industry where workers have an equal voice to employers, have dignity and respect on the job, and have the ability to move up to livable wage jobs regardless of the color of their skin or their gender.”

In order to shift this power, ROC says, consumers must join forces with workers. Throughout the country, ROC is helping restaurant diners understand the reality behind their meals. “Say you’re a waitress at an IHOP in Texas, and you’re working a graveyard shift,” Jayaraman said. “Maybe sometimes you get tips, maybe sometimes you don’t. Which means you may be earning $2.13 per hour, the federal minimum wage for tipped workers.

“That means maybe sometimes you can pay the rent, maybe sometimes you can’t. And 70% of the people earning this wage are women. They’re not these wealthy steakhouse servers you might think about in a large urban city. They’re women with children working at Denny’s, Applebee’s, Olive Garden. And a lot of times they struggle to put food on the table. The people who put food on our tables cannot afford to feed themselves.

“It’s super important for us to expand the definition of sustainability and sustainable food,” she said. “Sustainability has to include taking care of everybody who is a part of the food system, who picks, plants, processes, prepares it, and the people who consume it. We all need to be connected and understand our interconnectivity.”

Behind the Kitchen Door also exposes the racism and sexism pervasive in the industry. White workers are more likely to get the “good jobs” in the front of the house, making better tips or salaries, while workers of color have the lower-paying jobs in the kitchen. In many restaurants, there is a wage gap of nearly $4.00 between white workers and workers of color.

The eat-ups, together with other education and organizing tactics, are part of a larger project called the “Welcome Table,” an association of workers and consumers who are committed to food workers’ rights. The Welcome Table website is a multi-media hub with short films, a photo exhibit, books, news, and ways to take action. Soon the website will also be the place to go to learn about hosting eat-ups, with examples and resources to help with the planning.

“There are three things right now we are asking people to do,” Jayaraman said. “One is to buy Behind the Kitchen Door and help us get it out there as a national best seller. Two is to join the Welcome Table, because that is the place where we are gathering the people power, the numbers to show Congress that enough is enough. We need consumers to sign petitions, to say to Congress ‘we need to raise the wage.’

“And the third thing is to speak up every time people eat out. We created a diners’ guide and smart phone app. It wasn’t meant to tell people where to eat and where not to eat. It was actually meant to give people a tool that wherever they ate, whenever they ate, they could speak up at the end of their meal and say ‘loved the food, loved the service, but I see in this guide you don’t provide paid sick days,’ or ‘I see in this guide you don’t pay a livable wage and as a consumer I’d really like you to know that’s important to me and I’d like to see you do it.’”

To get involved, you can: