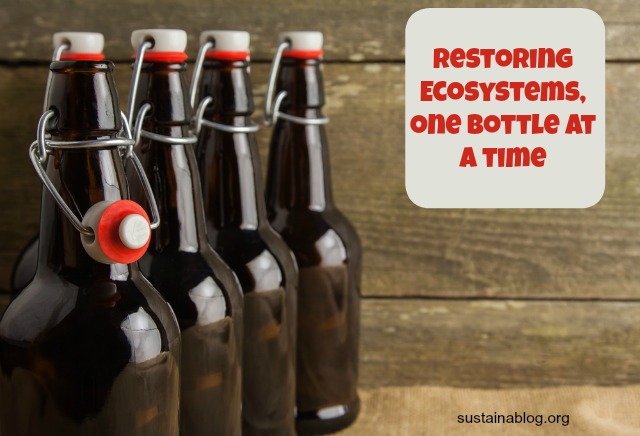 We’ve featured a number of restaurants and food producers focused on “rescuing” ingredients that would otherwise go to the landfill. While the use of food that would otherwise go to waste sets these establishments apart, so does the fact that they’ve got to be flexible with their offerings – no one knows what ingredients they’ll have to work with tomorrow or next week. This kind of focus and flexibility also applies to Brighton, UK-based Old Tree Brewery, a venture that makes both fermented and soft drinks from whatever produce comes their way.

While the notion of turning excess food into drinks was enough to catch my eye, I wanted to share this story because founders Nick Godshaw and Tom Daniell have created an ecosystem of sorts to “feed” their own passions. Not only do these twenty-somethings want to keep edible food out of “the skips,” but they also want to use these efforts to fund the establishment and maintenance of an 18-acre food forest. Essentially, they’re following nature’s model of turning waste into food… mostly metaphorically, but, at some levels, also literally.

On the input side, Godshaw told Michael Segalov at Munchies that “We get fruit from a whole load of places. We’ve struck a deal with a greengrocer who supplies stores in Brighton and London… At the end of the week, we get his surplus stock that otherwise would end up in the bin.” Other opportunities pop up more irregularly: “One weekend a supplier called us up, and asked if we wanted 1500 over-ripe mangos, for next to nothing.” Whatever ingredients reach them are turned into bottled drinks: their current offerings include “…classic ginger beers and pink lemonades, as well as green tea kombucha, nettle iced tea and elderflower cider.” The mangos became “juices, preserves, and mango wine.”

The purpose here isn’t just to make a buck, though: Godshaw and Daniell want to use the profits from their venture to fund sustainable agriculture initiatives, specifically their food forest. The idea is to produce value that’s returned to ecological restoration: according to their website, “We are like ants in food drink and production: planning a takeover based on plant landscapes & collective intelligence to create the conditions for earth repair.” And while they do want to grow, the plan is to keep their enterprise local and humanly scaled, so as not to undermine their restoration efforts.

Pretty idealistic, no doubt, but there’s clearly some business savvy at work here, too: they note how their costs often boil down to “the supplier’s time and the cost of transport.” That’s got to create fairly healthy margins, regardless of how idealistic you are.

Have you had the opportunity to try one of Old Tree’s products? If so, tell us what you thought. And if you know of similar efforts – anywhere – share those with us, too.