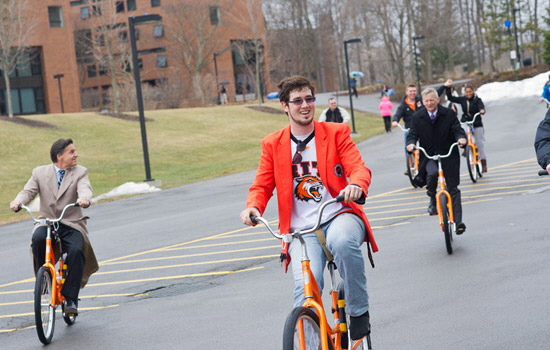 As we and others have noted many, many times before, the bicycle may be a near-perfect form of transportation: no emissions, no need to fill up, and a source of exercise and transportation. And while bikes aren’t nearly as expensive as cars, a durable model can get pricey… perhaps too pricey for some folks. Sure, it’s a matter of priorities for most us, but would you spend the hundreds (or thousands) of dollars required if you had access to a free bike?

Probably not… and, in a number of places around the world, a bike can cost you next to nothing. Let me qualify my use of “free” here: we’re talking about programs that provide you with a bike either temporarily, or permanently, for little or no monetary cost. That doesn’t mean “just come pick up a bike and ride away”… but it does mean spending significantly less than you would if you just went to a bike store and made a purchase, or even paid for a bike share.

So, why do these programs exist? In some cases, local governments want to encourage biking. In others, non-profit organizations want to give kids and adults the chance to earn a bike, and learn some new skills. Pretty much all of them encourage a sense of independence and self-sufficiency… exactly the feelings we all had when we first learned to ride a two-wheeler.

Take a look at our list… and let us know what we’ve missed on this front.

8 Programs that Provide People with a (Mostly) Free Bike

Testcyklisterna: This new program in Gothenburg, Sweden, first got me thinking about this concept. The city government really wants people biking, but realizes that many are a bit nervous about riding in traffic. So, for attending a training program to get you past those nerves, Testcyklisterna will give you a free bike on completion of the course. You also have to agree to not drive your car three days a week. (via takepart and Good.is)

St. Louis Bicycle Works: Yep, we’re doing pretty well on this front here in the Lou’ (and in the state of Missouri… you’ll see): Bicycle Works (which used to be down the street from me) gives kids (and adults, in much more limited fashion) the opportunity to earn a bike by attending a five-week program.

A Bike for a Coffee: a bike-sharing system in the Czech city of Brno is tied to cafes – buy a coffee, and for about $16, you can also get access to a bike for the day (which you can drop off at any of the participating locations). (via Citylab and Cleantechnica)

Simsbury Free Bike: This Connecticut-based multi-city non-profit runs a free bike share. There is a $10 deposit required, but that’s refundable upon return of the bike, helmet, and lock.

The RIT Free Bike Share: Rochester Institute of Technology just kicked off its free bike share program in April (pictured above). Run by the student government, it operates as a “bike library”: students can check out a bike, and must return it within 24 hours.

Revolve: On the other side of the state, this Kansas City-based non-profit not only advocates for bicycling, but also runs an Earn-a-Bike program. They also have a training program option (with more of a family focus), and also offer refurbished bicycles to anyone who volunteers with them for 10 hours. There is a $10 participant fee.

FreeBikeProject: This one’s pretty revolutionary. Two USC grads put together a program where students have free access to a bike for a semester (with a $99 refundable deposit). The bikes are paid for by advertisers – that advertising appears on the bikes themselves (and students are encouraged to post pictures of themselves and the bikes on social media). The company also partners with Bikes for the World to get bicycles out to people in the developing world. Check out their short promo video:

Worcester Earn-a-Bike: Like its Missouri cousins, this Massachusetts-based non-profit gives free bikes to young people and adults who put some time in working in their bike shop (and learning about bicycle maintenance).