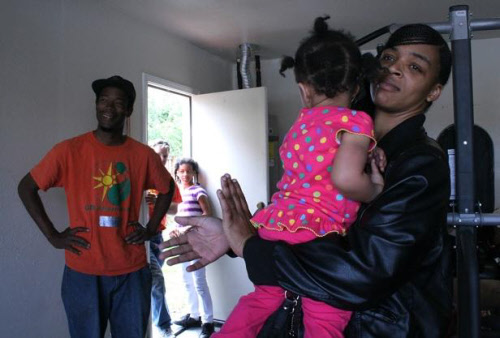 For Tiffany Woodwards and her two little girls (above), a solar system means more than eco-friendly power from the sun. It’s an incredible help paying for utility bills.

The Richmond, California family’s energy costs ranged from $150 to $180 per month, but thanks to the new 18-panel home solar array installed last month on the rooftop, a whopping 75% of that will be saved for the next 25-30 years.

Under the program, which is managed by Oakland nonprofit GRID Alternatives, households that earn 50-80% of the median area income are eligible for a highly subsidized or completely free solar system. Recipients must be customers of PG&E, SCE or SDG&E.

Interested in the program, Woodwards attended one of the informational sessions for SASH and decided to apply. A few months later, she was in.

“My mother always told me to save the energy,” she said. “That’s why I keep screaming to my kids, ‘Turn off the lights! Use the sun!’ Now we can also use the sun in a different way.”

Woodwards remarked that though she had seen solar panels on building rooftops before, she never really understood what they were, let alone imagined that she would own a set herself.

The 12 kind folks that installed the system include the GRID Alternatives team, volunteers from PG&E, and Richmond Solar graduates, another nonprofit focused on solar education.

Woodwards’ home marks the 32nd Richmond installation by GRID Alternatives to date. Richmond, an East Bay city plagued by high unemployment rates, was chosen because it deserves the assistance.

Said Lara Edge from GRID, “We specifically selected the city of Richmond because it’s a place where the health of the community can greatly benefit from renewable energy sources and the city itself deserves positive attention.”

Brittany Mauriss is an editor and solar expert at GreenMarketing.TV, the green entrepreneur’s source for start-up ideas and insightful interviews with top industry thinkers. She also blogs over at EntrepreneursforaChange.com.