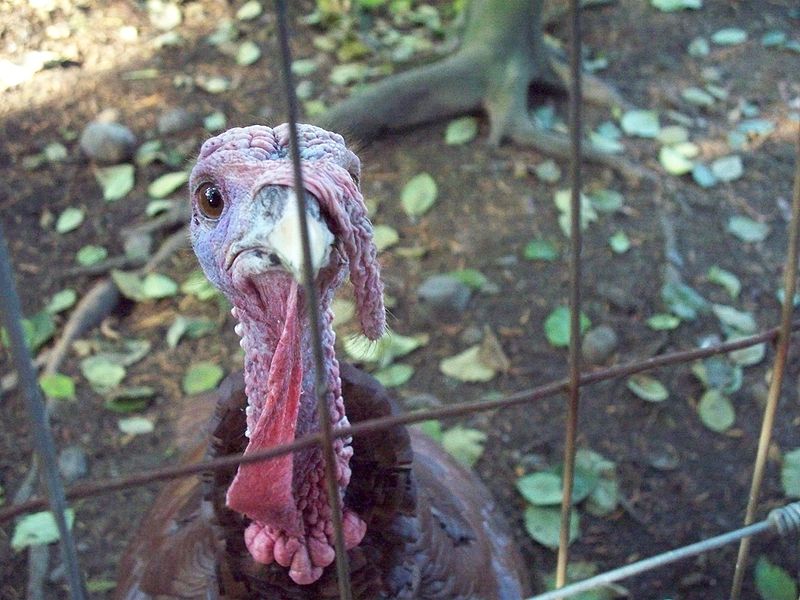 As Thanksgiving, aka “Turkey Day” to most Americans, draws near once again, supermarkets across the country are offering free turkeys as holiday promotions. The deal, of course, is that when you spend X dollars in the store, you get a free turkey to feed your family on Thanksgiving day. This enticement not being enough, the stores put up large posters showing juicy, golden-brown turkeys, and even advertise them in their store flyers and on receipts.

This sort of gimmick is both disturbing and offensive to anyone who cares about animals, human health, and the environment. I use such strong language because those turkeys being peddled and objectified for profiteering all surely come from factory farms, just like the majority of other animals that we use for food. So by turning the living beings that are slaughtered for our day of “thanks” into cheap prizes for spending money, the supermarkets are both supporting the factory-farming industry and devaluing the birds that have to suffer and die.

The Facts about Turkeys

It may not seem like that big of a deal to use turkeys as prizes, given that so many turkeys get eaten at Thanksgiving–and every other day, for that matter. According to the National Turkey Federation’s website EatTurkey.com, more than 226 million turkeys were consumed by Americans in 2009…46 million of those on Thanksgiving day. (Christmas Day came in second, with 22 million, and Easter third, with 19 million). They reported that 88% of Americans surveyed ate turkey on Thanksgiving, meaning that, with the average turkey weighing 16 pounds, 736 million pounds of turkey were consumed on Thanksgiving in 2009.

That is a lot of turkey flesh.

But this is not, as the National Turkey Federation takes it, a reason to celebrate. Nearly all turkeys (and other animals) consumed these days in the United States spend their short, painful lives in factory farms. Here, as the Farm Sanctuary website explains, they are crammed by the thousands into warehouse-like buildings, packed so tightly they can hardly move. As you can imagine, this environment is fetid and just ripe for disease…which is why the animals are pumped full of antibiotics and other drugs.

Of course, the tiny fraction of turkeys not raised in industrial conditions are still ultimately treated as objects with one end in mind: premature slaughter for human consumption; their lives are often not much better than their industrial cousins.

Slaughter time is far from humane as well, given that many birds are scalded (for de-feathering) and butchered while still conscious, when the electric shock or throat cutting fails to stun or kill them sufficiently. And this after a stress-inducing ride to the slaughterhouse in an open-air transport truck.

Perhaps more appalling, modern turkeys (no matter which type of farm they are on) have been genetically modified to reach that fleshy, scrumptious weight of 16 pounds or so, making them into odd Frankensteinian monsters. They grow much faster and differently than their ancestors, developing huge breasts that leave them unable to reproduce naturally (hence the need for artificial insemination) and causing diseases and leg problems. (To see a video and more information about the turkey industry, visit Farm Sanctuary’s website.)

Even if you do not care about animal welfare, these facts should give you pause because of the impact they have on human health. Those antibiotics used to keep turkeys and other farmed animals alive amount to nearly half of all antibiotics produced in this country, over 20 million pounds. This abuse of antibiotics has played a large part in the increase in antibiotic-resistant forms of bacteria and other pathogens. And due to the conditions of farms and slaughterhouses, turkeys and other animals are still disease ridden when they reach your kitchen. Ever wonder why you are advised to cook meat thoroughly and, in the case of poultry, virtually sanitize anything coming into contact with raw flesh?

On an even larger scale, the harmful environmental impacts of animal agriculture have come under intense scrutiny in recent years. As the United Nation’s Food and Agriculture Organization (FAO) and other international agencies have reported, livestock production worldwide is responsible for 18% of anthropogenic greenhouse-gas emissions, more than that from all forms of global transport (14%). Livestock also suck up huge amounts of land, water, and cereal grains–threatening arable land, water security, and food availability for humans, while only returning when consumed as little as one-fifth of the energy put in to raise them. Factory farms especially, though not exclusively, take this sort of resource depletion and pollution emission to grand scales.

The realities of the poultry industry are inescapable in many communities, where “growers” raise turkeys and chickens for corporate “integrators,” which then transport hundreds of individuals at a time to processing plants that can “process” hundreds of thousands (even millions) of them per week. The trucks taking the birds from the farms to their death travel on highways and local roads. My wife and I see them daily, barreling through the town with white feathers flying out behind them… Alternatively (or not, really), local farms tout “humane” turkeys for Thanksgiving, of course charging top dollar for equally dead turkey flesh from an individual being who, at the end of the day, was needlessly bred and killed and consumed after most likely being slaughtered at the same facilities as a factory-farmed turkey.

And the winner is…?

These reasons, touching on both ethics and health along with corporate manipulation, should make clearer why a “free” dead, tortured turkey is anything but a prize to be coveted. Obviously, every individual person can choose whether or not to buy a turkey on Thanksgiving, to take part in the tradition that connects being grateful with consuming a dead animal…or to celebrate in another way. That is the truth about Thanksgiving turkeys and every other animal product consumed by every human being: It is an ethical choice, whether or not one makes the connection between the supermarket and the farm.

But for stores to turn the tradition of Thanksgiving, and the birds who are slaughtered so that we may celebrate with a yummy meal, into a marketing ploy is truly sad. It increases the demand for turkeys and encourages the thoughtless consumption of these suffering, exploited, fundamentally manipulated creatures. Moreover, it further objectifies them, taking them from the usual bio-widget in our food industry to things that are valuable only because they can turn a profit. Is this any type of “prize” or “reward” to get excited about? Is this any way to treat the bird whom Benjamin Franklin proposed as our national symbol, instead of the bald eagle?

Thanksgiving is meant to be a day to celebrate our loved ones and all the things we are grateful for. What we eat on that day has nothing to do with true gratitude or celebration. Considering the ethical and health consequences that are inherent in eating turkeys, we surely can find better things to spend our money on than the supermarket turkey…or the items that will win us a “free” dead bird.

That is not what Thanksgiving is about.

If you would like to help farmed turkeys and support the end of factory farming, here are a few things you can do: