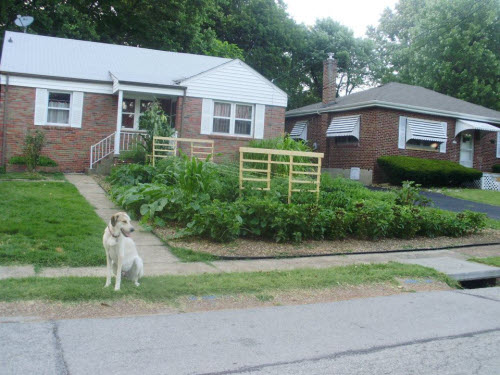 Last year at SUNfiltered, I wrote about Julie Bass of Oak Park, Michigan, and Ron Finley of Los Angeles, California, who were both literally fighting City Hall over gardens they’d planted. Bass had turned her front yard into a food garden (and was facing possible jail time); Finley had turned the parkway in front of his home into a community gardening space. This year, the tussle between a gardener and the local government is much closer to home (for me, that is): Karl Tricamo of Ferguson, Missouri, is challenging the city’s claim that his front-yard organic garden violates city codes.

I wrote about Karl’s situation at SUNfiltered, too: in the weeks since then, he’s gone before the city council to argue his case, and also started a website/blog to document the process (and he’s been very thorough on this front). His argument has stayed pretty consistent all along: there’s nothing in Ferguson’s code that prevents him from doing what he’s doing. As far as I can tell (and he and I have emailed a bit), he’s right: none of the wording of the codes cited by city officials seem to deal at all with gardening for personal consumption.

No doubt, edible gardens in the front yard are unusual, but that doesn’t make them wrong. He does have a back yard, but it’s not as fit for gardening as the front (lots of shade from trees, for example). I’m sure some are arguing that what he’s doing is unattractive, but that’s a matter of perspective: take a look at the photos he’s taken during the process, and judge for yourself. It strikes me as much ado about nothing…

What is important is the precedent set by these cases concerning the use of land by owners. I do think local governments can make regulations about activities that might impact the health and safety of those who don’t live on it, but it’s really hard to see how that’s the case here (or in the other examples). I tend to think the whole “property value” argument gets overused, and generally has nothing to back it up: it’s just someone’s opinion couched in the language of broader impact.

Garden on, Karl… there are lots of us out here who support you. I’ll be keeping an eye on this one.