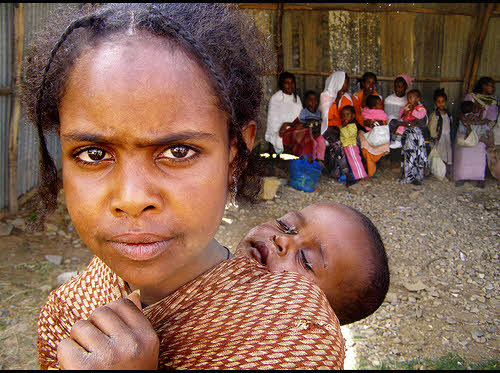 Editor’s note: Late last year, I was thrilled to review Lester Brown’s latest book Full Planet, Empty Plates: The New Geopolitics of Food Scarcity. Now, we’re pleased to support Earth Policy Institute’s efforts to spread the message of this important book by publishing selections from it. We’ll feature a selection about every two weeks; if you miss one, you can find it here.

The world is in transition from an era of food abundance to one of scarcity. Over the last decade, world grain reserves have fallen by one third. World food prices have more than doubled, triggering a worldwide land rush and ushering in a new geopolitics of food. Food is the new oil. Land is the new gold.

The abrupt rise in world grain prices between 2007 and 2008 left more people hungry than at any time in history. It also spawned numerous food protests and riots. In Thailand, rice was so valuable that farmers took to guarding their ripened fields at night. In Egypt, fights in the long lines for state-subsidized bread led to six deaths. In poverty-stricken Haiti, days of rioting left five people dead and forced the Prime Minister to resign. In Mexico, the government was alarmed when huge crowds of tortilla protestors took to the streets.

After the doubling of world grain prices between 2007 and mid-2008, prices dropped somewhat during the recession, but this was short-lived. Three years later, high food prices helped fuel the Arab Spring.

We are entering a new era of rising food prices and spreading hunger. On the demand side of the food equation, population growth, rising affluence, and the conversion of food into fuel for cars are combining to raise consumption by record amounts. On the supply side, extreme soil erosion, growing water shortages, and the earth’s rising temperature are making it more difficult to expand production. Unless we can reverse such trends, food prices will continue to rise and hunger will continue to spread, eventually bringing down our social system. Can we reverse these trends in time? Or is food the weak link in our early twenty-first-century civilization, much as it was in so many of the earlier civilizations whose archeological sites we now study?

This tightening of world food supplies contrasts sharply with the last half of the twentieth century, when the dominant issues in agriculture were overproduction, huge grain surpluses, and access to markets by grain exporters. During that time, the world in effect had two reserves: large carryover stocks of grain (the amount in the bin when the new harvest begins) and a large area of cropland idled under U.S. farm programs to avoid overproduction. When the world harvest was good, the United States would idle more land. When the harvest was subpar, it would return land to production. The excess production capacity was used to maintain stability in world grain markets. The large stocks of grain cushioned world crop shortfalls. When India’s monsoon failed in 1965, for example, the United States shipped a fifth of its wheat harvest to India to avert a potentially massive famine. And because of abundant stocks, this had little effect on the world grain price.

When this period of food abundance began, the world had 2.5 billion people. Today it has 7 billion. From 1950 to 2000 there were occasional grain price spikes as a result of weather-induced events, such as a severe drought in Russia or an intense heat wave in the U.S. Midwest. But their effects on price were short-lived. Within a year or so things were back to normal. The combination of abundant stocks and idled cropland made this period one of the most food-secure in world history. But it was not to last. By 1986, steadily rising world demand for grain and unacceptably high budgetary costs led to a phasing out of the U.S. cropland set-aside program.

Today the United States has some land idled in its Conservation Reserve Program, but it targets land that is highly susceptible to erosion. The days of productive land ready to be quickly brought into production when needed are over.

Ever since agriculture began, carryover stocks of grain have been the most basic indicator of food security. The goal of farmers everywhere is to produce enough grain not just to make it to the next harvest but to do so with a comfortable margin. From 1986, when we lost the idled cropland buffer, through 2001, the annual world carryover stocks of grain averaged a comfortable 107 days of consumption.

This safety cushion was not to last either. After 2001, the carryover stocks of grain dropped sharply as world consumption exceeded production. From 2002 through 2011, they averaged only 74 days of consumption, a drop of one third. An unprecedented period of world food security has come to an end.

When world grain supplies tightened in 2007, there was no idled U.S. cropland to quickly return to production and there were no excess grain stocks to draw upon. Within two decades, the world had lost both of its safety cushions.

The world is now living from one year to the next, hoping always to produce enough to cover the growth in demand. Farmers everywhere are making an all-out effort to keep pace with the accelerated growth in demand, but they are having difficulty doing so.

Today the temptation for exporting countries to restrict exports in order to dampen domestic food price rises is greater than ever. With another big jump in grain prices, we could see a breakdown in the world food supply system. If countries give in to the temptation to restrict exports, some lower-income importing countries might not be able to import any grain at all. When could this happen? We are not talking about the distant future. It could be anytime.

Want to read the rest of this chapter? Head over to the full text at Earth Policy Institute’s website.