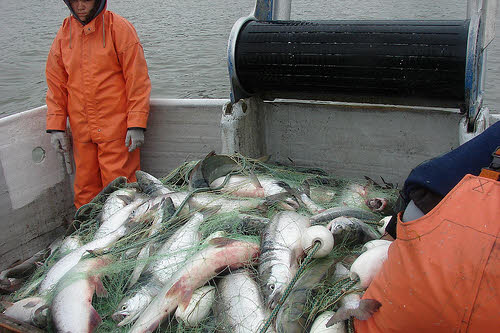 For most of the time that human beings have walked the earth, we lived as hunter-gatherers. The share of the human diet that came from hunting versus gathering varied with geographic location, hunting skills, and the season of the year. During the northern hemisphere winter, for instance, when there was little food to gather, people there depended heavily on hunting for survival. Our long history as hunter-gatherers left us with an appetite for animal protein that continues to shape diets today.

As recently as the closing half of the last century, a large part of the growth in demand for animal protein was still satisfied by the rising output of two natural systems: oceanic fisheries and rangelands. Between 1950 and 1990, the oceanic fish catch climbed from 17 million to 84 million tons, a nearly fivefold gain. During this period, the seafood catch per person more than doubled, climbing from 15 to 35 pounds.

This was the golden age of oceanic fisheries. The catch grew rapidly as fishing technologies evolved and as refrigerated processing ships began to accompany fishing fleets, enabling them to operate in distant waters. Unfortunately, the human appetite for seafood has outgrown the sustainable yield of oceanic fisheries. Today four fifths of fisheries are being fished at or beyond their sustainable capacity. As a result, many are in decline and some have collapsed.

Rangelands are also essentially natural systems. Located mostly in semiarid regions too dry to sustain agriculture, they are vast—covering roughly twice the area planted to crops.   In some countries, such as Brazil and Argentina, beef cattle are almost entirely grass-fed.  In others, such as the United States and those in Europe, beef is produced with a combination of grass and grain.

In every society where incomes have risen, the appetite for meat, milk, eggs, and seafood has generated an enormous growth in animal protein consumption. Today some 3 billion people are moving up the food chain. For people living at subsistence level, 60 percent or more of their calories typically come from a single starchy food staple such as rice, wheat, or corn. As incomes rise, diets are diversified with the addition of more animal protein.

The type of animal protein that people choose to eat depends heavily on geography. Countries that are land-rich with vast grasslands—including the United States, Brazil, Argentina, and Russia—depend heavily on beef or—as in Australia and Kazakhstan—mutton. Countries that are more densely populated and lack extensive grazing lands have historically relied much more on pork. Among these are Germany, Poland, and China. Island countries and those with long shorelines, such as Japan and Norway, have turned to the oceans for their animal protein.

Over time, global patterns of meat consumption have changed. In 1950, beef and pork totally dominated, leaving poultry a distant third. From 1950 until 1980, beef and pork production increased more or less apace. Beef production was pressing against the limits of grasslands, however, and more cattle were put in feedlots. Because cattle are not efficient in converting grain into meat, world beef production, which climbed from 19 million tons in 1950 to 53 million in 1990, has not expanded much since then.  In contrast, chickens are highly efficient in converting grain into meat. As a result, world poultry production, which grew slowly at first, accelerated, overtaking beef in 1997.

Although the world has had many years of experience in feeding nearly 80 million more people each year, it has much less experience with also providing for 3 billion people with rising incomes who want to move up the food chain and consume more grain intensive products. Whereas population growth generates demand for wheat and rice, humanities’ two food staples, it is rising affluence that is driving growth in the demand for corn, the world’s feedgrain. Historically, world corn and wheat production trends moved more or less together from 1950 until 2000. But then corn took off, climbing to 960 million tons in 2011 while wheat remained under 700 million tons.

It is the increase in consumption of livestock products plus the conversion of grain into fuel that have boosted the annual growth in world grain demand from the roughly 20 million tons a decade ago to over 40 million tons in recent years. As incomes continue to rise, the pressure on farmers to produce enough grain and soybeans to satisfy the growing appetite for livestock and poultry products will only intensify.