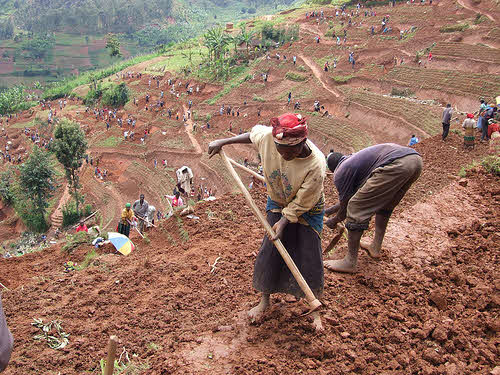 In 1938 Walter Lowdermilk, a senior official in the Soil Conservation Service of the U.S. Department of Agriculture, traveled abroad to look at lands that had been cultivated for thousands of years, seeking to learn how these older civilizations had coped with soil erosion. He found that some had managed their land well, maintaining its fertility over long stretches of history, and were thriving. Others had failed to do so and left only remnants of their illustrious pasts.

In a section of his report entitled “The Hundred Dead Cities,” he describes a site in northern Syria, near Aleppo, where ancient buildings are still standing in stark isolated relief, but they are on bare rock. During the seventh century, the thriving region had been invaded, initially by a Persian army and later by nomads out of the Arabian Desert. In the process, soil and water conservation practices used for centuries were abandoned. Lowdermilk noted, “Here erosion had done its worst. If the soils had remained, even though the cities were destroyed and the populations dispersed, the area might be repeopled again and the cities rebuilt. But now that the soils are gone, all is gone.”

The thin layer of topsoil that covers the earth’s land surface was formed over long stretches of geological time as new soil formation exceeded the natural rate of erosion. Sometime within the last century, soil erosion began to exceed new soil formation. Now, nearly a third of the world’s cropland is losing topsoil faster than new soil is forming, reducing the land’s inherent fertility. Soil that was formed on a geological time scale is being lost on a human time scale.

Scarcely six inches thick, this thin film of soil is the foundation of civilization. Geomorphologist David Montgomery, in Dirt: The Erosion of Civilizations, describes soil as “the skin of the earth—the frontier between geology and biology.”

The erosion of soil by wind and water is a worldwide challenge. For the rangelands that support 3.4 billion head of cattle, sheep, and goats, the threat comes from the overgrazing that destroys vegetation, leaving the land vulnerable to erosion. Rangelands, located mostly in semiarid regions of the world, are particularly vulnerable to wind erosion.

In farming, erosion results from plowing land that is steeply sloping or too dry to support agriculture. Steeply sloping land that is not protected by terraces, perennial crops, strip cropping, or in some other way loses soil during heavy rains. Thus the land hunger that drives farmers up mountainsides fuels erosion.

In the United States, wind erosion is common in the semiarid Great Plains, where the country’s wheat production is concentrated. In the U.S. Corn Belt, in contrast, where most of the country’s corn and soybeans are grown, the principal threat to soil is water erosion. This is particularly true in the states with rolling land and plentiful rainfall, such as Iowa and Missouri.

Water erosion of soil has indirect negative effects, which can be seen in the silting of reservoirs and in muddy, silt-laden rivers flowing into the sea. Pakistan’s two large reservoirs, Mangla and Tarbela, which store Indus River water for the country’s vast irrigation network, have lost a third of their storage capacity over the last 40 years as they fill with silt from deforested watersheds.

Evidence of wind erosion is highly visible in the form of dust storms. When vegetation is removed either by overgrazing or overplowing, the wind begins to blow soil particles away, sometimes creating dust storms. Because the particles are small, they can remain airborne over great distances. Once they are largely gone, leaving mostly larger particles, sandstorms begin. These are local phenomena, often resulting in dune formation and the abandonment of both farming and grazing. The emergence of sandstorms marks the final phase in the desertification process.

The vast twentieth-century expansion in world food production pushed agriculture onto highly vulnerable land in many countries. The overplowing of the U.S. Great Plains during the late nineteenth and early twentieth centuries, for example, led to the 1930s Dust Bowl. This was a tragic era in U.S. history—one that forced hundreds of thousands of farm families to leave the Great Plains. Many migrated to California in search of a new life, a movement immortalized in John Steinbeck’s The Grapes of Wrath.

Three decades later, history repeated itself in the Soviet Union. The Virgin Lands Project, a huge effort between 1954 and 1960 to convert grassland into grainland, led to the plowing of an area for grain that exceeded the current grainland in Canada and Australia combined. Initially this resulted in an impressive expansion in Soviet grain production, but the success was short-lived, as a dust bowl quickly developed there too.

Kazakhstan, at the center of the Virgin Lands Project, saw its grainland area peak at 25 million hectares in the early 1980s. After dropping to 11 million hectares in 1999, the area expanded again, reaching 17 million hectares in 2009, but then began once more to decline. Even on this reduced area, the average grain yield today is scarcely 1 ton per hectare—a far cry from the 7 tons per hectare that farmers get in France, Western Europe’s leading wheat producer and exporter. The precipitous drop in Kazakhstan’s grain area illustrates the price that countries pay for overplowing and overgrazing.

Today two giant new dust bowls have formed. One is centered in the Asian heartland in northwestern China and western Mongolia. The other is in the African Sahel—the savannah-like ecosystem that stretches across Africa from Somalia and Ethiopia in the east to Senegal and Mauritania in the west. It separates the Sahara Desert from the tropical rainforests to the south. Both of these newer dust bowls are massive in scale, dwarfing anything the world has seen before.