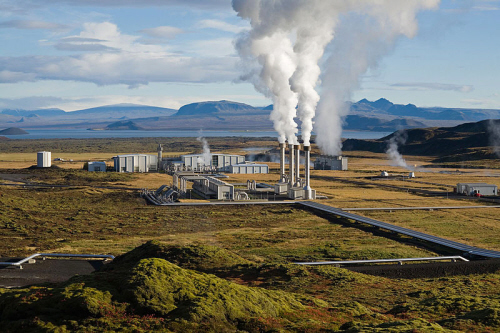 In 1904, Italy’s Prince Piero Ginori Conti became the first person to use thermal energy from within the earth to turn on the lights — five of them, to be precise. Now, more than a century after his experiment, 24 countries are using geothermal power. The 10,900 megawatts of capacity installed worldwide generate enough renewable electricity to meet the needs of more than 6 million U.S. homes. Geothermal power has grown at just 3 percent annually over the last decade, but the pace is set to pick up substantially, with close to 9,000 megawatts of new capacity projected for 2015. Some 350 projects are under development in dozens of countries.

The energy source for geothermal electricity generation is the tremendous heat flowing from the Earth’s core and mantle and from radioactive isotopes decaying in the Earth’s crust. Developers drill wells to reach porous and permeable rock containing reservoirs of hot water or steam that is then brought to the surface to drive a turbine and generate electricity. Historically, this required a water temperature of 150 degrees Celsius (302 degrees Fahrenheit) or more, which is found in abundance in countries along the Pacific Ring of Fire — including Chile, Indonesia, Japan, and the United States — as well as in Africa’s Great Rift Valley region. Recent technology improvements, however, have made power generation using lower-temperature resources possible, enabling Germany, Hungary, and others to begin harnessing their geothermal power potential.

While geothermal projects require significant up-front capital investments, especially for exploration, drilling, and power plant construction, the typically low operation cost — including zero expense for fuel — means that over their lifetimes geothermal power plants are often cost-competitive with fossil fuel or nuclear power plants. Another plus is that geothermal plants can provide round-the-clock baseload power, requiring no backup from non-renewable fuel generation.

With 3,100 megawatts installed in nine western states, the United States is the unrivaled leader in geothermal power capacity. (See data at www.earth-policy.org.) Half of this is located at The Geysers, a complex of 17 plants in northern California that is the world’s largest geothermal development.

In the last 20 years, less than 330 megawatts of new geothermal power has been installed in the United States. But thanks to recent government incentives — including loan guarantees, production tax credits, and cash grants — today the U.S. geothermal industry is booming. More than 120 confirmed projects representing close to 1,400 megawatts are under development in 14 states. Most of this activity is in the West, especially in established geothermal havens like California and Nevada, but projects are also emerging to the east in Louisiana, Mississippi, and Texas. More than 750 megawatts of new capacity are slated for completion by 2015.

While the United States ranks highest in geothermal power generating capacity, nowhere is geothermal energy more pervasive than in Iceland. With 575 megawatts of installed capacity, a figure that could double by 2015, geothermal power provides one quarter of Iceland’s electricity. Its state-owned electric utility is even considering building a 1,170-kilometer (727-mile) undersea cable to export geothermal and hydropower to Scotland.

But above and beyond generating electricity from the Earth’s heat, Icelanders use geothermal’s heat energy directly. Residents have used natural hot springs for bathing for centuries, and in more modern times they have geothermally heated greenhouses and fish farms. Most impressively, some 90 percent of Iceland’s residential space heating comes from geothermal. Nearly 80 other countries also use geothermal heat directly.

In the Pacific, the Philippines is another nation taking advantage of geothermal resources. Ranking second in the world, with 1,900 megawatts of installed capacity, the Philippines gets 17 percent of its electricity from geothermal. It plans to reach 2,550 megawatts in the next four years.

But it is Indonesia that has the most ambitious geothermal power goals in the world. The country currently has the third greatest amount of installed geothermal power capacity — some 1,200 megawatts. Most of these plants are operated by Pertamina Geothermal Energy, a subsidiary of the state oil and gas company. As the government looks to reduce dependence on fossil fuels and increase the reliability of its power sector, it plans to more than triple geothermal installations by 2015. By 2025, Indonesia intends to reach 12,000 megawatts of geothermal power, enough to meet more than 70 percent of current electricity needs. While this would allow the country to back out nearly all coal and oil in the power sector, it would exploit only two fifths of Indonesia’s estimated geothermal resource.

Japan is another country with enormous geothermal resources, but so far just a small fraction — less than 540 megawatts — has been developed. Japan’s 80,000 megawatts of potential capacity using conventional technologies could meet half of its current electricity demand. With the government’s recent pledge to emphasize renewable energy and energy efficiency over nuclear power, a renewed commitment to geothermal may be imminent.

In Latin America, Mexico’s 958 megawatts of installed geothermal power capacity make it number four on the list of geothermal leaders. Mexico’s geothermal capacity currently exceeds that of all other countries in the region combined, but there is enormous potential waiting to be harnessed in many other Latin American countries. A 1999 report from the U.S.-based Geothermal Energy Association (GEA) identified 39 countries, now with a combined 800 million people, whose geothermal resources could meet 100 percent of their electricity needs. Nine of these, including Costa Rica, Ecuador, El Salvador, and Peru, are in Central and South America. El Salvador’s 6 million people already obtain 26 percent of their electricity from geothermal; the share for Costa Rica, with 5 million people, is 13 percent.

Thirteen of the countries identified in the GEA report are in East Africa, with many of these located along the tectonically and volcanically active Great Rift Valley stretching from Eritrea in the north to Mozambique in the south. Only Ethiopia (with 7 megawatts) and Kenya (with more than 200 megawatts) have yet begun to tap their geothermal potential. But other countries, including Rwanda and Uganda, are actively pursuing development.

A 2011 Pike Research report projects that even without new pro-geothermal policies, global investment in this energy source will more than double from $3 billion in 2010 to $6.8 billion in 2020. Add to this that the number of countries using geothermal power is expected to jump from 24 at present to 46 in 2015, and geothermal power seems poised for an impressive expansion. The possibilities are almost limitless: the estimated 4.6 million megawatts of potential geothermal capacity worldwide, including from EGS and underwater hydrothermal sources, could power the entire world economy nearly two times over.

Matt Roney is the Research Associate for Earth Policy Institute. Data and additional resources at www.earth-policy.org.