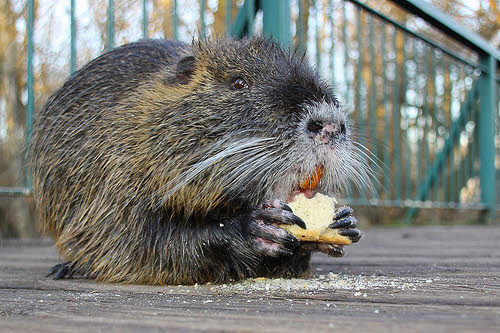 Sounds like the beginning of trailer for some bad creature feature on SyFy, right? Well, it’s not… it’s actually the beginning of a trailer for a documentary. That’s right: giant invasive animals really are eating Louisiana… from the roots up. Brought to the state from their native Argentina in 30s for their fur, nutria are literally “rodents of unusual size” that are also playing a role in destroying the state’s coastal wetlands. See, nutria love the roots of wetland plants, and they breed like, well, rodents… so they’re a major element of the loss of coastal marsh.

If you’ve never spent much time in Southern Louisiana, you may have never have heard of nutria. Those of us who have lived there not only know about them, but also know that keeping their population in check has turned into a bit of a cottage industry. Yes, people eat them, and there have been efforts to get more to do so. Others make products from leather and fur derived from the swamp rats. The state will even pay you $5 per nutria that you kill. So far, nothing’s stopped their invasion…

The guys at Tilapia Film of San Francisco love a good offbeat environmental story, and the orange-toothed nutria caught their attention. They’ve spent some time, and shot some footage, in Louisiana’s coastal swamps and marshes, and want to introduce the rest of the world to these odd-looking rodents that are wreaking such havoc.  Like so many others, they’ve gone to Kickstarter to pitch their concept…  here’s their video:

The concept’s clearly working: they’ve received pledges for just under 75% of their funding goal, and still have 25 days to go.  Of course, they’ve also got some of the coolest pledging gifts I’ve ever seen: you can score a nutria tooth necklace, nutria sausage, or even a nutria fur hat at various levels of giving (and even earn titles not heard much outside of Southern Louisiana:  can’t remember the last time I heard someone called a “coon-ass”).

If you decided to kick a few bucks towards this one, make sure to come back and tell us why… or just share your own knowledge of nutria with us in the comments below.