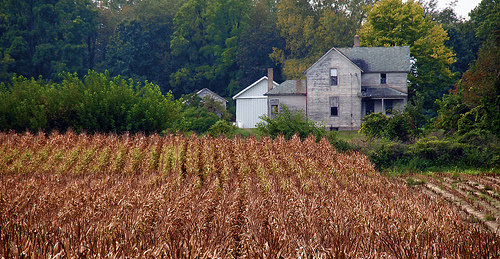 The world produced 2,241 million tons of grain in 2012, down 75 million tons or 3 percent from the 2011 record harvest. The drop was largely because of droughts that devastated several major crops—namely corn in the United States (the world’s largest crop) and wheat in Russia, Kazakhstan, Ukraine, and Australia. Each of these countries also is an important exporter. Global grain consumption fell significantly for the first time since 1995, as high prices dampened use for ethanol production and livestock feed. Still, overall consumption did exceed production. With drought persisting in key producing regions, there is concern that farmers in 2013 will again be unable to produce the surpluses necessary to rebuild lowered global grain reserves. Corn, wheat, and rice account for most of the world’s grain harvest. Whereas rice and most wheat are consumed directly as food, corn is largely used for livestock and poultry feed and for industrial purposes. Climbing demand for corn-intensive meat, milk, and eggs plus the recent increased production of corn-based ethanol have made corn the world’s leading grain since 1998. In 2012, the global corn harvest came in at 852 million tons, while 654 million tons of wheat and 466 million tons of rice were produced. Wheat takes up the most land because corn yields are typically much higher, averaging close to 5 tons per hectare globally compared with about 3 tons per hectare for wheat and rice. (One hectare = 2.47 acres.) In the United States, corn yields in the top-producing areas exceed 10 tons per hectare when conditions are favorable.

The 2012 U.S. grain harvest was 8 percent smaller than the year before. The heat and drought that gripped nearly two thirds of the contiguous United States during the summer was particularly severe throughout the midwestern Corn Belt. As temperatures soared, so did corn prices, hitting an all-time high of $8.39 a bushel on August 21st. Yields in Iowa, the top corn-producing state, were down 20 percent from 2011. In Illinois, typically the number two producer, yields dropped by 33 percent, ending up at the lowest level since the historic 1988 drought. As of January 2013, each state’s farmers have collected more than $1 billion in crop insurance payments.

The total U.S. corn harvest came in at 274 million tons, down from 314 million tons the year before. The drop would have been far worse were it not for strong production in states less affected by dryness or with ample irrigation; in fact, Minnesota and North Dakota had record high output. The result was that some of the trains and barges that normally transport corn out of the Corn Belt reversed routes to bring corn in for meat and ethanol producers. U.S. corn stocks fell to 15 million tons, enough for just 21 days at current consumption levels. Such a low corn-stocks-to-use ratio—unseen before by farmers working the land today—presages further price volatility.

As high corn prices shrank ethanol’s profit margins, a number of distilleries suspended operations. U.S. corn use for ethanol dropped to 114 million tons, down from 127 million tons in 2011. About a third of the total U.S. grain harvest went to fuel for cars.

Next: The trend towards falling grain stocks