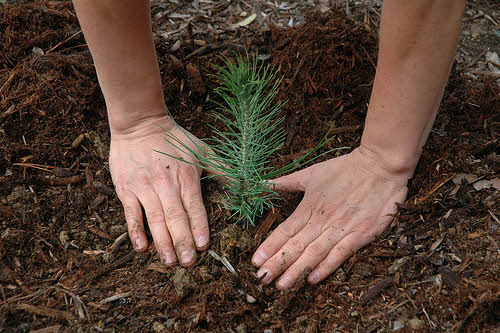 Global deforestation is concentrated in the developing world. Tropical deforestation in Asia is driven primarily by the fast-growing demand for timber and increasingly by the expansion of oil palm plantations for fuel. In Latin America, the fast-growing markets for soybeans and beef are together squeezing the Amazon. In Africa, the culprit is mostly fuelwood gathering and land clearing for agriculture.

Fortunately, there is a vast unrealized potential in all countries to lessen the various demands that are shrinking the earth’s forest cover. In industrial nations, the greatest opportunity lies in reducing the amount of wood used to make paper. The goal is first to reduce paper use and then to recycle as much as possible. The rates of paper recycling in the top 10 paper-producing countries range widely, but South Korea, which recycles an impressive 91 percent, stands out. If every country recycled as much of its paper as South Korea does, the amount of wood pulp used to produce paper worldwide would drop by more than one third.

In developing countries, the focus needs to be on reducing fuelwood use. Indeed, fuelwood accounts for just over half of all wood removed from the world’s forests. Some international aid agencies, including the U.S. Agency for International Development and the United Nations Foundation, are sponsoring projects to increase fuelwood efficiency through the use of more efficient cookstoves. Over the longer term, pressure on forests can be reduced by replacing firewood with solar thermal cookers or even with electric hotplates powered with renewable energy.

One major challenge is to harvest forests responsibly. There are two basic approaches to timber harvesting. Clearcutting is environmentally devastating, leaving eroded soil and silted streams, rivers, and irrigation reservoirs in its wake. The alternative is to selectively cut only mature trees, leaving the forest largely intact. This ensures that forest productivity can be maintained in perpetuity.

Forest plantations can reduce pressures on the earth’s remaining forests as long as they do not replace old-growth forest. As of 2010, the world had 652 million acres in planted forests, more than one third as much land as is planted in grain. Tree plantations produce mostly wood for paper mills or for wood reconstitution mills. Increasingly, reconstituted wood is substituted for natural wood as lumber and construction industries adapt to a shrinking supply of large logs from natural forests.

As tree farming expands, it is starting to shift geographically to the moist tropics, where yields are much higher. One hectare (2.47 acres) of forest plantation produces 4 cubic meters of wood per year in eastern Canada and 10 cubic meters in the southeastern United States. But in Brazil, newer plantations are getting close to 40 cubic meters. The U.N. Food and Agriculture Organization projects that as plantation area expands and yields rise, the harvest could more than triple between 2005 and 2030. It is entirely conceivable that plantations could one day satisfy most of the world’s demand for industrial wood, thus helping protect the world’s remaining natural forests.

Although banning deforestation may seem far-fetched, environmental damage has pushed Thailand, the Philippines, and China to implement partial or complete bans on logging. All three bans followed devastating floods and mudslides resulting from the loss of forest cover. In China, after suffering record losses from weeks of nonstop flooding in the Yangtze River basin in 1998, the government discovered that it simply did not make economic sense to continue deforesting. The flood control service of trees standing, they said, was three times as valuable as the timber from trees cut.

International environmental groups such as Greenpeace and WWF have negotiated agreements to halt deforestation in the Brazilian Amazon and in parts of Canada’s boreal forests. Daniel Nepstad and colleagues reported in Science in 2009 on two recent developments that together may halt deforestation in the Amazon basin. One is Brazil’s Amazon deforestation reduction target that was announced in 2008, which prompted Norway to commit $1 billion if there is progress toward this goal. The second is a marketplace transition in the beef and soy industries to avoid Amazon deforesters in their supply chains.

Finally, we need a tree planting effort to both conserve soil and sequester carbon. To achieve these goals, billions of trees need to be planted on millions of acres of degraded lands that have lost their tree cover and on marginal croplands and pasturelands that are no longer productive.

Recognizing the central role of forests in modulating climate, the Intergovernmental Panel on Climate Change has examined the potential for tree planting and improved forest management to sequester CO2. Since every newly planted tree seedling in the tropics removes an average of 50 kilograms of CO2 from the atmosphere each year during its growth period of 20–50 years, compared with 13 kilograms of CO2 per year for a tree in the temperate regions, much of the afforestation and reforestation opportunity is found in tropical countries.

This global forestation plan to remove atmospheric CO2 would need to be funded by the industrial countries that put most of it there. In comparison with other mitigation strategies, stopping deforestation and planting trees are relatively inexpensive. They pay for themselves many times over. An independent body could be set up to administer and monitor the vast tree planting initiative. The key is moving quickly to stabilize climate before temperature rises too high, thus giving these trees the best possible chance of survival.

There are already many tree planting initiatives proposed or under way. Kenya’s Nobel laureate, Wangari Maathai, who years ago organized women in Kenya and several nearby countries to plant 30 million trees, inspired the Billion Tree Campaign that initially was managed by the U.N. Environment Programme. Tree planting in now being tracked by the Plant for the Planet Foundation. The initial goal in 2006 was to plant 1 billion trees. If half of those trees survive, they will sequester 5.6 million tons of carbon per year. By the end of 2011, over 12 billion trees had been planted.

Some countries reforest on their own. South Korea is in many ways a reforestation model for the rest of the world in this respect. When the Korean War ended half a century ago, the mountainous country was largely deforested, much as Haiti is today. Beginning around 1960, under the dedicated leadership of President Park Chung Hee, the South Korean government launched a national reforestation effort. Today forests cover nearly 65 percent of the country, an area of more than 15 million acres. While driving across South Korea in November 2000, it was gratifying to see the luxuriant stands of trees on mountains that a generation earlier were bare. We can reforest the earth!