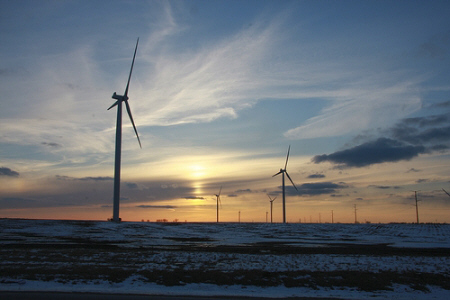 Even in the face of a worldwide economic downturn, the global wind industry posted another record year in 2009 as cumulative installed wind power capacity grew to 158,000 megawatts. With this 31 percent jump, the global wind fleet is now large enough to satisfy the residential electricity needs of 250 million people. Wind provides electricity in over 70 countries, 17 of which now have at least 1,000 megawatts installed.

China led the way in 2009 with an astonishing 13,000 megawatts of new wind capacity, the first time any country has built more than 10,000 megawatts in a single year. With 25,000 megawatts overall, China has doubled its total installed wind capacity in each of the last five years, bringing it into third place behind the United States and Germany. And considering the ambitious projects already in its development pipeline, it is not likely to stay in third place for long.

China’s unprecedented Wind Base program helps explain why. Six wind-rich provinces across the country’s northern half—from northwestern Xinjiang to eastern Jiangsu—have been selected to host seven wind mega-complexes of between 10,000 and 37,000 megawatts each. When complete, these “wind bases” will boast close to 130,000 megawatts of generating capacity, which is more than the entire world had at the end of 2008. Amendments to China’s landmark Renewable Energy Law of 2006, due to take effect in April 2010, aim to support this ambitious wind growth. Government agencies have been directed to determine and enforce the share of total electricity generation that must come from renewable sources, not unlike the renewable portfolio standards adopted by 29 U.S. states. The amendments will also provide for badly needed transmission lines and grid upgrades.

The United States passed longtime leader Germany in installed capacity in 2008 and then widened its lead in 2009, expanding its wind fleet by nearly 10,000 megawatts to reach a cumulative 35,000 megawatts. Texas remained the leading state in both annual and total wind installations, reaching 9,400 megawatts overall. And while Iowa is a distant second, with 3,700 megawatts of total wind capacity, at least 17 percent of its electricity generation comes from wind.

As the financial crisis tightened credit and suppressed investment in early 2009, the U.S. wind industry was bracing for a steep drop in installations from 2008’s record 8,400 megawatts. But due in large part to wind-friendly provisions in the American Recovery and Reinvestment Act of 2009, more than 100 new wind farms came online in 28 states, in what was the strongest year yet for U.S. wind construction. (See data at www.earthpolicy.org/index.php?/indicators/C49).

In the European Union (EU), Spain added the most new wind in 2009. But with 26,000 total megawatts installed, Germany still commands Europe’s largest wind capacity. Two states in northern Germany that have a combined population of 4 million, Sachsen-Anhalt and Mecklenburg-Vorpommern, routinely meet some 40 percent of their electricity needs with wind energy.

While no other European countries have as extensive a wind infrastructure as Germany and Spain do, several rapidly growing markets in the region have great potential. In Italy, France, and the United Kingdom, total installed capacity has at least doubled since 2006, with all three crossing the 4,000 megawatt mark in 2009. Another country quickly expanding its wind generation is Portugal, which by reaching just over 3,500 megawatts in 2009 edged past wind veteran Denmark into ninth place in the world rankings. Still, with one fifth of its electricity coming from wind Denmark leads all countries in that category.

Such large wind electricity shares may become more common across Europe as EU member countries work to meet their targets under the 2009 Renewable Energy Directive, which sets an overall goal of 20 percent renewable energy by 2020. Indeed, as the European Union actually saw net reductions in coal and nuclear generating capacity in 2009, wind accounted for close to 40 percent of all newly installed capacity, making it the region’s number one new power source for the second straight year.

Europe, China, and the United States tend to dominate the wind headlines, but many other countries are also harnessing this abundant energy source. India, for example, installed 1,300 megawatts in 2009, which was 30 percent less than in 2008 but enough to make it the fifth country to surpass 10,000 megawatts of installed wind capacity. India’s wind industry expects the market to start to rebound in 2010 with the help of several government initiatives introduced in late 2009.

Canada installed 950 megawatts of wind capacity in 2009, coming just shy of entering the top 10 list for total capacity. Ontario’s new feed-in tariff, a policy tool used for years in Europe under which utilities pay a premium to purchase electricity generated from renewables, should encourage more projects to enter Canada’s wind development pipeline, which already has some 4,600 megawatts due for completion by 2015.

By the end of 2009, just 760 megawatts were installed on the African continent, 90 percent of which was in Egypt and Morocco. But commercial-scale projects are under way in several sub-Saharan countries, including Ethiopia, South Africa, and Kenya. When complete in mid-2012, the 300-megawatt Lake Turkana wind farm in northwest Kenya will be Africa’s largest, capable of generating 17 percent of that country’s electricity.

Most of the world’s wind turbines are found on land, but offshore wind capacity is poised to grow rapidly from its current 2,100 megawatts. Nearly 600 megawatts were brought online in 2009, including the world’s largest offshore project: Denmark’s 209-megawatt Horns Rev 2 wind farm in the North Sea. The United Kingdom leads the offshore category, with 40 percent of global capacity, and appears intent on keeping its position. In January 2010, The Crown Estate announced exclusive wind development agreements for 32,000 megawatts in nine zones within U.K. waters, intended to provide 25 percent of the United Kingdom’s electricity by 2020. Overall, more than 100,000 megawatts of offshore wind are proposed or in development in Europe.

Having increased ninefold in total capacity since the start of the twenty-first century, wind power is quickly solidifying its position as an important part of the global energy mix. As governments look to reduce dependence on price-volatile fossil fuels and to cut carbon emissions, wind—a widespread, abundant, and inexhaustible resource with zero fuel cost—is becoming an increasingly attractive option. In a 2009 study of world wind resources, Harvard University scientists concluded that the top 10 carbon dioxide-emitting countries could satisfy all of their electricity needs using wind alone. The world will of course use a variety of technologies to meet future energy demand, but these findings leave no doubt: the potential for wind power to replace fossil fuels and take a leading role in stabilizing climate is huge.

Use less energy (even when it comes from renewable source): browse our selection of Energy Star appliances