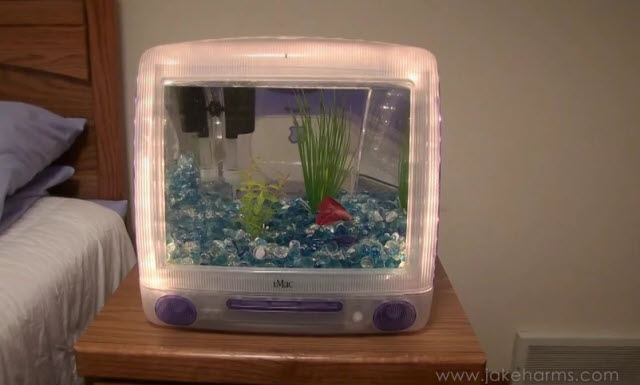 The iMac G3 has been off the market since 2003, but no doubt many owners of these machines have held on to them. While they may not have the computing power for current programs and websites, they’re just so gorgeous – how could you throw that away?

That’s the response Jake Harms had after being asked to dispose of one of these machines away back in 2007. He asked if he could take it home and tinker with it instead. He quickly discovered online that many people had upcycled their G3s into aquariums… but no one had recorded and shared instructions for doing so. Jake got to work making his own iMac G3 aquarium, and after lots of trial and error, came up with his own approach… which he did write down. Now, Jake makes “Macquariums” for sale, and also sells kits and  instructions for others to do it.

The video above walks you though the features of Jake’s aquariums: from the necessary features for keeping fish alive and healthy to unique aesthetic elements. Put one of these in your home, and you’ll definitely have a conversation piece.

So, given the topics we’ve written about in the past, I’d love to see a variation on Jake’s aquarium that includes aquaponic elements. No reason you couldn’t use one of these to grow some herbs indoors… If you’ve got other ideas for how this upcycling project might be modified, do share…