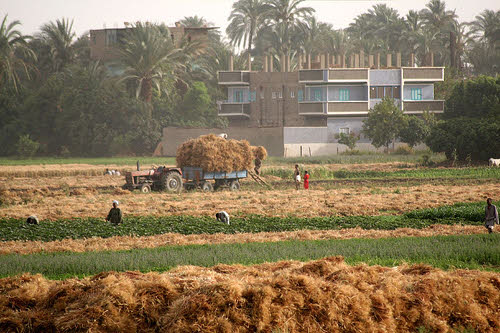 The Arab countries in the Middle East and North Africa make up only 5 percent of the world’s population, yet they take in more than 20 percent of the world’s grain exports. Imports to the region have jumped from 30 million tons of grain in 1990 to nearly 70 million tons in 2011. Now imported grain accounts for nearly 60 percent of regional grain consumption. With water scarce, arable land limited, and production stagnating, grain imports are likely to continue rising. Egypt is the largest grain producer in the Arab world, accounting for almost 40 percent of the region’s harvest. Its grain production has doubled over the last 20 years. But because nearly all of the country’s available freshwater and arable land is already used for agriculture, further expansion of the grain harvest is unlikely. Across the Arab world, grain production is stagnating, yet grain demand is growing rapidly as population expands. Since 1960, the region’s population has nearly quadrupled to 360 million. By 2050 the region is projected to add another 260 million people, dramatically increasing pressure on already stressed land and water resources.

But population growth is not the only factor increasing demand for grain. With policies in many Arab countries encouraging meat production, the amount of grain used for livestock and poultry feed has soared from less than half a million tons in 1970 to 40 million tons in 2011. Increased meat and dairy consumption have raised grain use per person by 50 percent over that period.