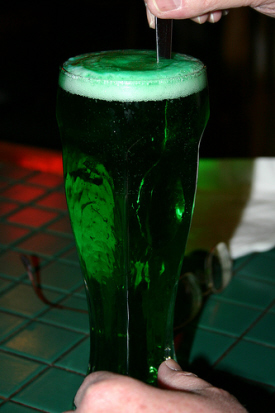 It’s finally the one time of year when cabbage becomes an acceptable food group and stores at last see fit to serve us up some good ol’ fashioned corned beef. I will never really understand why we can’t readily eat it year ‘round, but then, I suppose that’s why I’m not in charge of the beef industry. But, I drift. The point of this article is not, in fact, leafy greens, potatoes, leprechauns, stashes of gold or even corned beef. It is rather, my offerings on how to make your green beer really green this year.

We’re pretty well trained how to color up our March 17th beverages a deliciously “appetizing” shade of green, but what’s much more exciting lately is the attempt of more and more breweries to offers us a truly green beer, meaning all sorts of good things. We can now find beer that has been fermented in an environmentally friendly environment and in an eco-friendly manner and beer created with green ingredients like locally grown, chemical-free, pesticide-free organic barley and hops. We can choose beers only made in lightweight bottles. Better still, we have the option to purchase beer only distributed by keg, and for our best option: some of us can even track down kegs that were brewed and distributed locally only. Any way you want to look at it, a truly green, green beer would be the perfect accompaniment to your festivities this week.

Here’s some top picks by brewery:

If you’re not into choosing beer by the brand, then consider these tips to make your beer drinking greener – no food coloring required.

Happy St. Patrick’s Day. Enjoy, be safe, and see if you can take the day to be greener in an eco-friendly way, not just with the shamrocks now splashed across your home.

Image credit: SpaceAgeSage at Flickr under a Creative Commons license