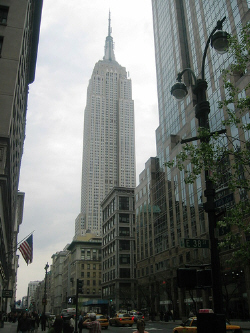 Because buildings last for 50–100 years or longer, it is often assumed that cutting carbon emissions in the building sector is a long-term process. But that is not the case. An energy retrofit of an older inefficient building can cut energy use and energy bills by 20–50 percent. The next step, shifting entirely to carbon-free electricity, either generated onsite or purchased, to heat, cool, and light the building completes the job. Presto! A zero-carbon operating building.

Some countries are taking bold steps. Notable among them is Germany, which as of January 2009 requires that all new buildings either get at least 15 percent of space and water heating from renewable energy or dramatically improve energy efficiency. Government financial support is available for owners of both new and existing buildings. In reality, once builders or home owners start to plan these installations, they will quickly see that in most cases it makes economic sense to go far beyond the minimal requirements.

There are already signs of progress in the United States, including provisions within the 2009 American Recovery and Reinvestment Act designed to stimulate the economy. Among other items, it provides for the weatherization of more than a million homes, beginning with an energy audit. A second part calls for the weatherization and retrofitting of a large share of the nation’s stock of public housing. A third component is the greening of government buildings by making them more energy-efficient and, wherever possible, installing devices such as rooftop solar water and space heaters and rooftop solar electric arrays.

In the private sector, the U.S. Green Building Council (USGBC)—well known for its Leadership in Energy and Environmental Design (LEED) certification and rating program—heads the field. This voluntary program has four certification levels—certified, silver, gold, and platinum. A LEED-certified building must meet minimal standards in environmental quality, materials use, energy efficiency, and water efficiency. LEED-certified buildings are attractive to buyers because they have lower operating costs, higher lease rates, and typically happier, healthier occupants than traditional buildings do.

Looking at the LEED criteria provides insight into the many ways buildings can become more energy-efficient. The certification process for new buildings begins with site selection, and then moves on to energy efficiency, water efficiency, materials use, and indoor environmental quality. In site selection, points are awarded for proximity to public transport, such as subway, light rail, or bus lines. Beyond this, a higher rating depends on provision of bicycle racks and shower facilities for employees. New buildings must also maximize the exposure to daylight, with minimum daylight illumination for 75 percent of the occupied space. The use of renewable energy adds still more points.

Thus far LEED has certified 1,600 new buildings in the United States, with some 11,600 planned or under construction that have applied for certification. The commercial building space that has been certified or registered for certification approval totals 5 billion square feet of floor space, or some 115,000 acres (the equivalent of 115,000 football fields).

The Chesapeake Bay Foundation’s office building for its 100 staff members near Annapolis, Maryland, was the first to earn a LEED platinum rating. Among its features are a ground-source heat pump for heating and cooling, a rooftop solar water heater, and sleekly designed composting toilets that produce a rich humus used to fertilize the landscape surrounding the building.

Toyota’s North American headquarters in California, which houses 2,000 employees, has a LEED gold rating and is distinguished by a large solar facility that provides much of its electricity. Waterless urinals and rainwater recycling enable it to operate with 94 percent less water than a conventionally designed building of the same size. Less water use also means less energy use.

A 60-story office building with a gold rating being built in Chicago will use river water to cool the building in summer, and the rooftop will be covered with plants to reduce runoff and heat loss. Energy-conserving measures will save the owner $800,000 a year in energy bills. The principal tenant, Kirkland and Ellis LLP, a Chicago-based law firm, insisted that the building be gold-certified.

In 2002 a global version of the USGBC, the World Green Building Council, was formed. As of spring 2009 it included Green Building Councils in 14 countries, including Brazil, India, and the United Arab Emirates. Eight other countries—ranging from Spain to Viet Nam—are working to meet the prerequisites for membership. Among the current members, India ranks second in certification after the United States, with 292 million square feet of LEED-certified floor space, followed by China (287 million) and Canada (257 million).

Beyond greening new buildings, there are numerous efforts to make older structures more efficient. In 2007, the Clinton Foundation announced an Energy Efficiency Building Retrofit Program, a project of the Clinton Climate Initiative (CCI). In cooperation with C40, a large-cities climate leadership group, this program brings together financial institutions and some of the world’s largest energy service and technology companies to work with cities to retrofit buildings, reducing their energy use by up to 50 percent.  The energy service companies—including Johnson Controls and Honeywell—committed to provide building owners with contractual “performance guarantees” assuring the energy savings and maximum costs of the retrofit project. At the launch of this program, former President Bill Clinton pointed out that banks and energy service companies would make money, building owners would save money, and carbon emissions would fall.

In April 2009, the owners of New York’s Empire State Building announced plans to retrofit the 2.6 million square feet of office space in the nearly 80-year-old 102-story building, thereby reducing its energy use by nearly 40 percent. The resulting energy savings of $4.4 million a year is expected to recover the retrofitting costs in three years.

Beyond these voluntary measures, government-designed building codes that set minimal standards for building energy efficiency are highly effective. In the United States this has been dramatically demonstrated in differences between California and the country as a whole in housing energy efficiency. Between 1975 and 2002, residential energy use per person dropped 16 percent in the country as a whole. But in California, which has stringent building codes, it dropped by 40 percent. The bottom line is that there is an enormous potential for reducing energy use in buildings in the United States and, indeed, the world.

Want to green your own building? Take the first steps with energy efficient lighting.