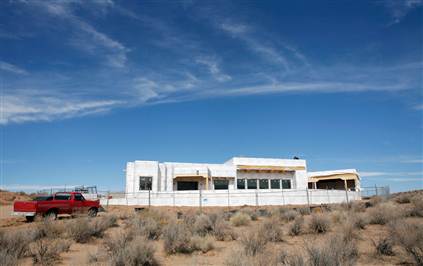 That’s really an understatement. According to this MSNBC article (via commonground), the demand for green building practices and products is multiplying rapidly across the US:

According to the [National Association of Home Builders], about 2,600 homes were built to some kind of green standard in 2002. That jumped to 14,600 in 2004 and it’s expected to multiply again this year, said Ray Tonjes, chairman of the NAHB’s green building subcommittee.

That common sense is catching on, not only with home buyers and builders, but also with state and local governments:

Albuquerque Mayor Martin Chavez is encouraging builders to move ahead without mandates from the government. He also points out that he’s taking his own steps, including an initiative that requires future city vehicles to run on alternative fuel.

“We have different challenges now than we did perhaps 30 years ago,” Chavez said. “The reality is that we live here in the high desert. Sustainability has become extraordinarily important.”

“It saves money and it’s a good investment for taxpayers,” said Ned Farquhar, the governor’s senior policy adviser for energy and the environment.

This is exciting! We treehuggers aren’t alone anymore in recognizing and advocating for green building principles; now we’ve got business people and politicians recognizing the economic wisdom of building green and implementing sustainable practices in existing buildings. Furthermore, designers and architects recognize the aesthetic possibilities of green buildings. While we can’t proclaim “mission accomplished” yet, it’s awfully satisfying to see so many “practical people” recognizing that green homes and buildings aren’t just the stuff of hippy fantasies (though there’s nothing wrong with that) — they’re the sensible option for many of us.