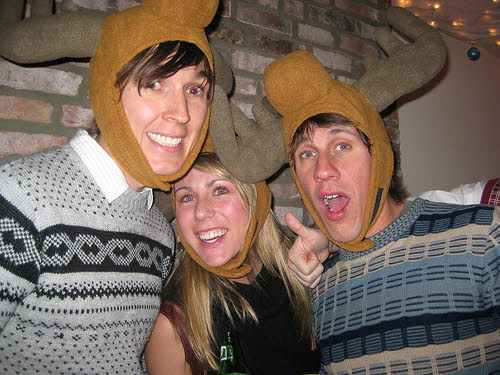 One simply did not mess with tradition in my family. Easter, Thanksgiving, Christmas – it didn’t matter which holiday we were celebrating, the day was painstakingly scripted. No one dare suggest deviation of any kind and, had I had the courage to suggest introducing a green element to our regimented traditions, I would have been scrutinized mercilessly.

Some men are Baptists, others Catholics; my father was an Oldsmobile man.

Every Christmas I got the worst gifts. When I was 15, I asked for climbing equipment and hiking boots. My father bought me a chain saw. The folks at the ER already knew me on a first name basis from my various misguided forays into pyrotechnics, so you would think he would know better. I vowed to myself that things would be different when I started a family some day.

Only one thing in the world could’ve dragged me away from the soft glow of electric sex gleaming in the window.

I got married, had kids, and somehow lost my way. With the many trips to the pediatrician, soccer fields, and back-to-school nights, I’d forgotten some of the things that were once very important to me. Then last Christmas arrived and reality slapped me hard once again.

In the heat of battle my father wove a tapestry of obscenities that as far as we know is still hanging in space over Lake Michigan.

Once gifts were unwrapped, I found myself holding a package of extra large camouflage-green boxer shorts, an industrial size bottle of Rogaine, and a Chia Pet fashioned into a tasteful table lamp. My wife and children quite obviously hate me. Or, maybe, they simply need some guidance in the ways of green gift giving. While my mind was weaving a tapestry of obscenities worthy of my old man, I had an idea.

This year I leave nothing to chance. I’m making a green gift list, checking it twice, and sharing it with everyone I know. Including you. So, whether you’re shopping for yourself this Christmas or for a loved one, you’ll know to steer clear of the chia pet isle.

I’ve been in love with sneakers ever since I was a kid. And while I thought my Nike shoes were great, nothing felt or looked as good as a pair of Pumas. Now, Puma makes a sustainable shoe, the Re-Suede. According to the Puma website, much of the shoe is made of 100% recycled polyester fibers “produced by a chemical recycling process that reduces both the energy consumption and the CO2 emission by 80%”.

And, most importantly, they look really cool.

I got hooked on shredders from my experience working with industrial garbage disposal models. When the boss had his back turned, we’d throw the biggest thing we could find into that hydraulic beast, just to see what that baby could do.

Guys love to destroy stuff. That’s why a shredder is the perfect gift. Not only does it reduce the amount of waste one produces, but some companies now make models that meet RoHS standards and use energy saving technologies to avoid phantom power loss.

The trick is to find a consumer shredder big enough to dispose of a Chia pet lamp, camouflage boxer shorts and a chain saw.

I can attest to how well made “vegan” footballs and basketballs are, but I’d always been warned about the quality of organic golf balls. That is, until now. Dixon makes a product called the Earth Golf Ball, and it’s 100% eco-friendly. Best of all, it’s a high performance ball. The heavy metal element normally used in golf ball production has been replaced by an organic compound similar in some ways to salt.

One of my earliest and best childhood memories is listening to Jean Sheppard, author of The Christmas Story, on his nightly NYC area radio show. The only thing that could have made his stories about Flick, Schwartz, and the gang any better is if I’d been able to listen to them on a radio made of recycled material. Now, I can.

This “environmentally sound” radio (get it?) takes four AA batteries and can also be hooked up to your mp3 player or telephone to be used as a speaker phone.

Here’s a gift I want REALLY bad (to my wife: Please take note). Asus makes a laptop that replaces the use of plastic to manufacture the case and other select elements with (drum roll please)…bamboo. From what I understand, they use Moso bamboo to replace roughly 15% of parts that would ordinarily be made of plastic.

And, most importantly, it looks really cool.

After dinner, maybe we’ll go Christmas caroling or do what Dad used to do…fall asleep while listening to a ball game. On my cardboard radio.

[For the trivia buffs among us, the headings above are borrowed from A Christmas Story, a film narrated by Jean Sheppard and based on a chapter from his classic book, In God We Trust – All Others Pay Cash]

Rich Rossi is a guest blogger and firm believer that while traditions are great, starting new, greener ways to observe them can be even more fulfilling.