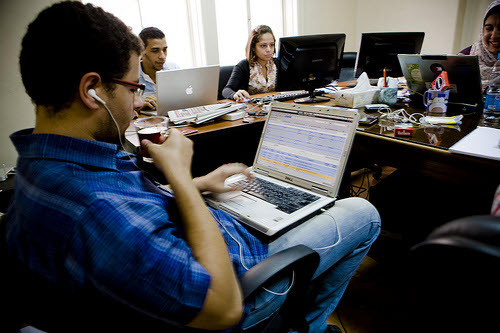 Want to hire a firm to build a website for you, and want to make sure their sustainability values align with your own? You’re going to focus on companies that use ENERGY STAR and EPEAT-certified machines, right? What else can you do? Sure, it’d be great if they recycle, keep printing to a minimum, and provide a bike-friendly workplace, but in terms of the actual work, they can really only focus on the efficiency and recyclability of their hardware… right?

If you’d asked me this a couple of weeks ago, I’d have said “Yes… that’s pretty much what a web design firm can do.” Portland, Oregon’s Opensourcery does all the things I’ve listed above, but has also figured out further forms of waste-creation in the process of website creation: namely, in the coding, testing, and launching of sites. If you’re not a coder (and I’m not), it’s a little hard to wrap your head around creating greater efficiencies here: I mean, isn’t writing code just writing code?

Not according to Opensourcery CEO Brian Jamison, who took the time to explain the ways he and his team have rethought web development in more sustainable terms.

Again, as someone who’s not a developer, I got fascinated quickly by the ways Opensourcery has worked to keep the development process efficient, sustainable, and user-focused. Their practices don’t stop here – they do many of the typical “green office” practices, and even keep their developers’ hours down to a genuine forty-hour week to maintain the efficiency of their people.

Know of other development firms taking similar steps towards a more sustainable web design and development process? Do share…