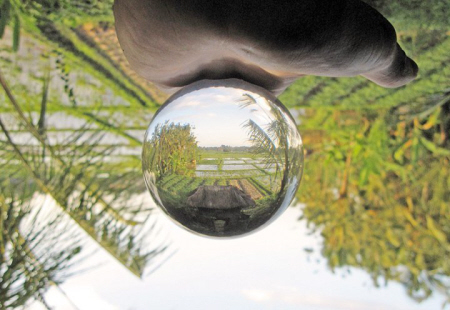 If you’ve been with us for a while, you may remember Caroline Savery’s posts here at sustainablog: her debate with Justin over the definition of sustainability, her exploration of fireworks (among other things), and, most importantly, her accounts of her three-month effort to live 100% sustainably. Her Sust Enable Project, from which those last posts sprang, was originally conceived of as an “educational episode series” designed “to teach people about the best options out there for crafting a ‘100% sustainable’ lifestyle in our modern, urban context.”

It was a great idea, and a few of the episodes were made… but Caroline came to realize that her concept of sustainability during the Summer of 2008 was loaded with a lot of cultural baggage… which made her efforts not just challenging (as they would be), but overwhelming at times.

Some might call it a day, and write the experiment off as a failure; Caroline, however, decided to take what she’d learned from her initial challenges to explore the concept of sustainability in more depth… and, thus, the idea of Sust Enable: the Metametary was born. Her new vision: “…a feature-length creative nonfiction exploration of the question “what does sustainability mean?”

So, Caroline, like others we’ve featured here, created a project on Kickstarter to raise money for the film’s production. She’s put together an experienced production and creative team, recruited an impressive group of experts to appear in the film, and assembled an equally impressive advisory board. In short, she’s not doing this on the cheap… she’s seeking out $15,000 to move the Metamentary forward.

It’s an admirable undertaking, and I’m more than happy to put the word out here… I hope you’re able to lend some support. As with all Kickstarter projects, she’s under the gun: the project must receive pledges for the entire $15,000 by Saturday, October 23rd, or it gets nothing. Pledge amounts start at just $1.

So, count me in at the $30 level… and see what you’re able to contribute. As Caroline notes in the Kickstarter appeal, “We believe that the more people are engaged in discussing and debating the meaning of sustainability in terms of their own lives and communities, the more viable a sustainable world becomes…” and this film could help take that discussion to more meaningful levels.

If you decide to contribute, let us know… and also check out the project’s Facebook page.

Not shooting for 100% sustainability? No problem… but you can take small steps towards a healthier home environment with green cleaning products from companies like Seventh Generation, Ecover, and Bi-O-Kleen.