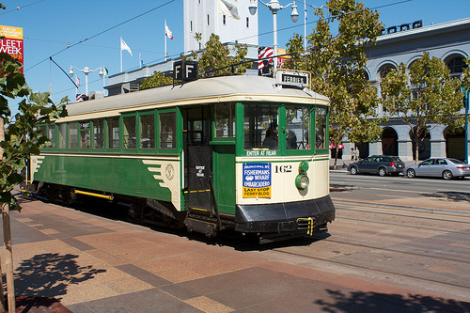 Thinking about doing some renovations around the house to make it more energy efficient? Increase insulation levels? Put in more efficient windows? Maybe even install a white roof?

All of these things will help… but if you live in a car-oriented suburb, it turns out there may be one action you can take that will produce more bang for the buck than all of these options… and that’s moving.

OK, that’s probably a bit of a stretch, but Kaid Benfield at the NRDC’s Switchboard blog highlighted a new report from Jonathan Rose Companies and the EPA that shows, in terms of total energy use, a transit-oriented home, or one “…within a quarter to a half a mile of a transit stop,” likely produces the greatest energy savings for a home… more than lots of green features in a home in a car-focused development.

The report, Location Efficiency and Housing Type – Boiling it Down to BTUs, looked at total energy consumption: not just electricity and gas used in the home itself, but also transportation energy. Specifically, it examined the average total of BTUs (British Thermal Units) consumed in various housing types located in different kinds of development settings. While housing type itself made a difference in energy consumption (so, multifamily homes used less energy than detached single family homes), the report claims that “A home’s location relative to transportation choices has a large impact on energy consumption.”

How large? Well, transit orientation made the single biggest difference for a detached single-family home: in a conventional suburban development, a home consumes an annual average of 240 million BTUs per year. That same home in a transit-oriented location consumes 147 million BTUs a year… which is slightly less that a suburban home with “green” home elements and cars. The following chart provides an overview of the white paper’s findings:

Obviously, these findings have more relevance for urban planners and policy makers… you’re probably not going to jack up your house and move it (and that probably wouldn’t be cost efficient, anyway). But they also give the home buyer something to consider when s/he is shopping for housing… in addition to energy efficiency features (which are still really important).

As one commenter noted at Switchboard, this may also underscore the need to address “built-in incentives that favor sprawl” with “…performance-based parking pricing, mileage- and congestion-based roadway prices, and the transformation of the traditional property tax into a value-capture user fee.” Or, you could just raise the gas tax, and/or put a price on carbon.

See holes in the conclusions here? Got other ideas for making this kind of information more transparent to the market? Share your thoughts…

Looking for ways to cut the energy bills without moving? Check out our selection of energy efficient appliances, including refrigerators, dishwashers, air conditioners, and vacuum cleaners.

Image Credits: jay galvin at Flickr under a Creative Commons license; Jonathan Rose Companies with support from the EPA