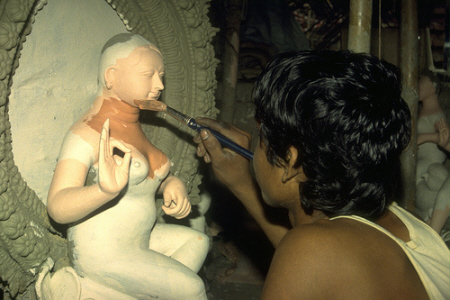 If you’ve got a home painting project on tap, you’ve got a number of choices for safer, greener paints: from low or no-VOC versions of traditional products to making your own paint from milk, flour, and other common ingredients.

But what if you’re dealing with a massive event in which thousands, or even millions, of people are using toxic paints… and even intentionally putting those paints into local water sources?

Officials in parts of Southern Asia deal with just such a situation every year with the Fall Durga Puja, a celebration of the Hindu goddess Durga. During this six-day event, worshipers build small, temporary “temples,” complete with painted idols of the goddess. These statues go through a ritual immersion in water… and the chemical compounds from the paints on the statues (which can contain lead and other nasty materials) end up in the water supply.

Officials in West Bengal, India (which hosts a huge Durga Puja) have tried to address this issue by distributing less toxic paints. But scientists at Jadhavpur University are going a step further: experimenting with making paint out of flowers, which happen to be one of the biggest waste products to come out of the celebration (they’re also an important part of the rituals of the festival).

According to MSN News — India, chemists at the university have developed a process to extract color from discarded flowers, and turn it into a paint that idol-makers at the festival can use on their statues. It’s still in the experimental stages, and needs more testing of its durability, but university pro vice-chancellor Siddhartha Dutta notes that they’ve already started to reach out to crafts people about using the organic paints in next year’s festival.

Are there potential problems beyond the ones Dutta observed? Sure. Part of the process for extracting the paint involves treating the decomposing flowers “with an aqueous solution in high temperatures,” so the energy inputs could be high. And, of course, we’d want to know about the chemical composition of the final product before saying “Feel perfectly safe dunking statues covered with this paint in the river.”

But you’ve got the like the thinking process… not only do tons of flower waste come out of the festival itself, but the West Bengal floral industry (the country’s fourth largest) has to throw away about 40% of its product every day… so this help keeps some of that organic waste out of landfills… or the Ganga river, where it often gets dumped.

Not a ton of information available on this development, but it strikes me as intriguing and innovative. Think there’s potential for larger-scale commercial development? The concept of “paint made from flowers” strikes me as immediately appealing.

Got new paint up? Check out other green decor items to match it, including table linens, rugs, and picture frames.

Image credit: public.resource.org at Flickr under a Creative Commons license