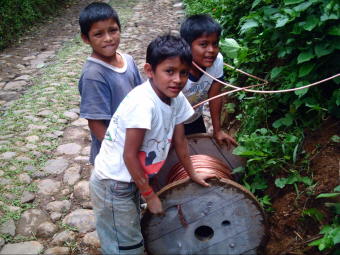 Thanks to Cat Laine at the Appropriate Infrastructure Development Group (AIDG) for passing along news of a recent success. Xela Teco, the first AIDG-incubated business, completed a micro-hydroelectric project last month for the Comunidad Nueva Alianza, a village in El Palmar, Guatemala. That project is now providing electricity for 40 households for the first time. According to AIDG’s press release, it took a business model like this to bring power to this village, as a remote location and an impoverished population made traditional grid expansion hightly unlikely:

Before the existence of XelaTeco, which was established with the financial and technical backing of U.S. non-profit AIDG, an isolated village like the Comunidad Nueva Alianza (CNA) had few options for getting electricity, let alone renewable energy. Due to their remoteness, an electric grid extension was years if not decades away. The high and volatile cost of diesel in Guatemala made reliance on electric generators impractical. The concrete shell of an old micro-hydroelectric system existed at the community. Unfortunately, no providers could completely rebuild it at a price that CNA could afford.

When it burst onto the scene in August 2005, XelaTeco filled a much-needed niche. It was a new breed of business in Guatemala that manufactures, installs and repairs green technologies for people living between $2-4 a day, development agencies and institutions. Because XelaTeco could locally manufacture many essential, yet very complex components for much less than their purchase price in U.S. or European markets, it became the CNA’s leading choice of contractor.

CNA community leader Javier Jimenez notes that the micro-hydro project fulfills the promise of “triple bottom line” business: it protects the environment while raising the standard of living for villagers, and providing them with opportunities to diversify their incomes. The company also created biogas systems (biodegesters) and a solar hot water heating system for the community. The company’s website has a full overview of the technologies it provides.

I found this news exciting because it again shows the potential to address the needs of people in the developing world with appropriate technology that doesn’t harm those same people, or the land, air and water they depend on for survival. It also shows that markets exist where, often, traditional businesses are the least likely to look: among people who have little, but who also will have a better chance to raise their own standards of living with some investment in their potential. I wish the best of luck to people living in the CNA, but know they’ve now got a better opportunity to create their own luck.. Congrats to the folks at AIDG!