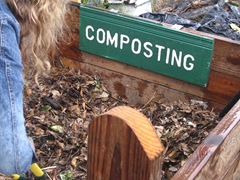 When the future of our planet’s environment is concerned, one of the groups that we hope are paying attention is those currently attending college. They will be the leaders, the decision makers, the discoverers and changers of the future. But at the moment, they are simply learning the value of calculus and being exposed to copious amounts of beer.

But thanks to the National Wildlife Federation’s just released Campus Environment 2008 report card, conducted in partnership with Princeton Survey Research Associates International, we can at least be certain that, in addition to learning about beer and the opposite sex, our college students are getting a lesson in green.

The report follows up on its first run, back in 2001, by providing a review of programs at 1,068 institutions, grading them on an A to D scale for collective, national performance on a range of issues such as energy, water, transportation, waste reduction and environmental literacy.

27% of US colleges responded to the survey, making this the largest survey of its kind.

“The 2008 report finds that campus leaders value sustainability. They speak about it, plan for it, hire staff to support it, and the campuses they lead are steadily becoming greener models for the wider society,” said Julian Keniry, NWF’s senior director of campus and community leadership. “At the same time, the educational curricula to prepare students for a post-college world influenced by climate change are not keeping pace. On most campuses, the business leaders and facilities managers appear to be making greater strides towards sustainability than their faculty peers.”

The biggest step forward made by the colleges is in water conservation. Faculty and students have been instrumental in creating efforts to conserver not only water, but energy as well, and increasing the amount of clean energy powering the campuses. However there has been little progress made in troubleshooting the issues thrown up by commuting. Maybe the college campuses of the US should take a look at the Google campus.

Sadly, as mentioned, academics are lagging behind operations. “This Report Card tells us there is a widening gap between where higher education actually is on teaching sustainability versus where it should be,” said Kevin Coyle, vice president of education for National Wildlife Federation. “Given the environmental challenges and opportunities this generation will face, I find this cause for deep concern and am committed to working with our partners to address this on both state and federal levels.”

Nevertheless, only a few years in to the supposed environmental crisis being a public awareness issue, this is good news. Colleges will be providing businesses and governments with the next generation of employees, and growing this level of awareness in that next generation can only be a good thing.

credit: megananne at Flickr under a Creative Commons license

More from the GO Network