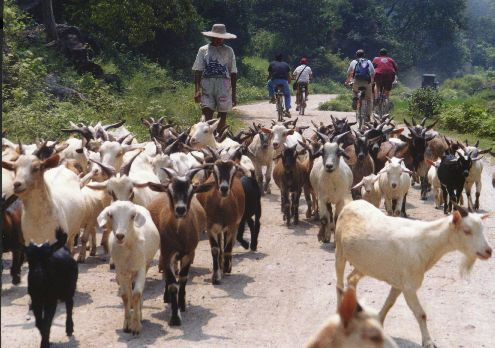 After the earth was created, soil formed slowly over geological time from the weathering of rocks. It began to support early plant life, which protected and enriched it until it became the topsoil that sustains the diversity of plants and animals we know today. Now the world’s ever-growing herds of cattle, sheep, and goats are converting vast stretches of grassland to desert.

One indicator that helps us assess grassland health is changes in the goat population relative to those of sheep and cattle. As grasslands deteriorate, grass is typically replaced by desert shrubs. In such a degraded environment, cattle and sheep do not fare well. But goats—being particularly hardy ruminants—forage on the shrubs. Goats are especially hard on the soil because their sharp hoofs pulverize the protective crust of soil that is formed by rainfall and that naturally checks wind erosion. Between 1970 and 2009, the world’s cattle population increased by 28 percent and the number of sheep stayed relatively static. Meanwhile, goat herds more than doubled. Growth in goat populations is particularly dramatic in some developing countries. While cattle herds in Pakistan doubled between 1961 and 2009 and the number of sheep nearly tripled, the goat population grew more than sixfold and is now roughly equal to that of the cattle and sheep populations combined. These livestock have grazed the countryside bare of its rainfall-retaining vegetation, contributing to the massive flooding that ravaged Pakistan in the summer of 2010. A giant dustbowl is now forming south of the Sahara in Africa’s Sahel region, thanks in part to overgrazing. Nigeria, Africa’s most populous country, reports losing 867,000 acres of rangeland and cropland to desertification each year. As human and livestock populations grow, herders and farmers compete for an ever smaller amount of land for each person and animal. The goat population in particular has skyrocketed as the soil has eroded. If Nigeria’s human population and livestock herds continue growing as they are today, the associated land degradation will eventually undermine herding and farming. A second giant dustbowl is developing in northern and western China, western Mongolia, and central Asia. After economic reforms in 1978 shifted the responsibility for farming from large, state-organized production teams to individual farm families, China’s livestock populations spiraled upward. The number of goats continues to grow as the land is stripped of vegetation and winds help remove the soil to convert rangelands into desert. We can contrast the situation in China with that in the United States, which has a comparable grazing capacity. While the two countries have similar numbers of cattle, the United States’ combined sheep and goat population of 9 million is minute compared with China’s 281 million. Unfortunately, all kinds of livestock degrade soils by removing vegetation and trampling the ground. Livestock rotation, mixed crop-livestock farming, and other sustainable agricultural practices can reduce soil erosion, raise cropland productivity, and lead to higher soil carbon content and soil moisture. In some situations, small numbers of livestock can be kept in restricted areas and forage can be brought to them, as in India’s cooperative dairy model. But in the end, the only viable way to eliminate overgrazing on the earth’s rangelands is to balance the size of flocks and herds with nature’s capacity for regrowth.

More data from World on the Edge by Lester R. Brown is available at www.earth-policy.org.

Photo credit: Praziquantel at Flickr under a Creative Commons license